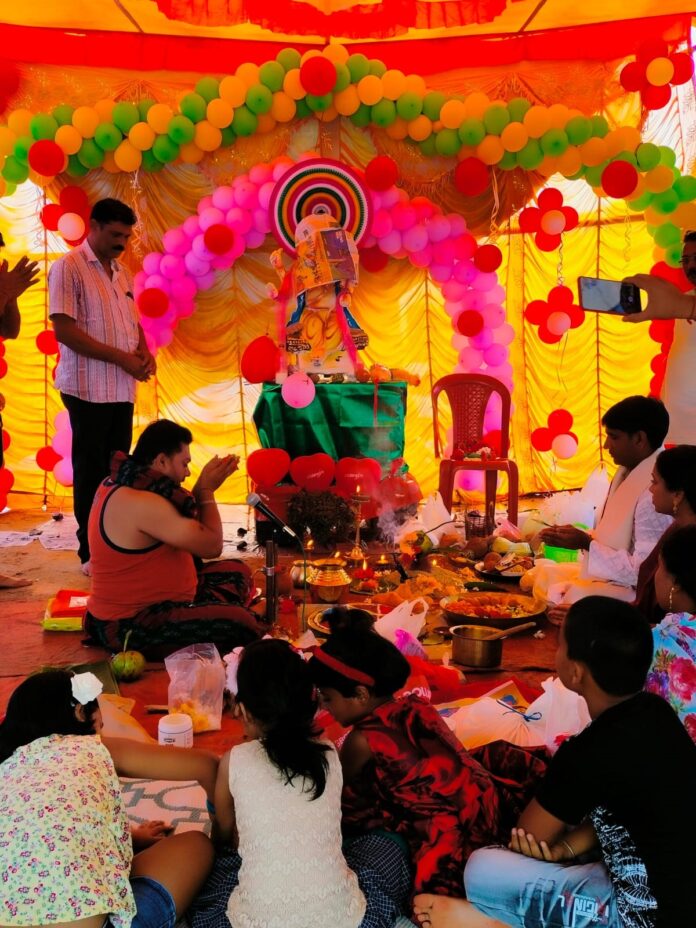 Jeypore ( Buruea Head , Prasanta Kumar Bishoyi) : The most auspicious ganesh chaturthi of Lord Ganesh was Celebrated with traditional gaiety and grandeur. With people from different parts of Jeypore subdivision of Koraput district gathered around the pandal of Hanuman Colony and paid their devotion before the Vighana Vinasana. MLA Jeypore Taraprasad Bahinipati , BJP Ex-MLA candidate Goutam Samantray and Renowned Musician cum Managing Director of Swaro Ghungura Dhiren Mohan Pattnaik joined as the source of inspiration to grace the occasion and they also motivated everyone for the peaceful Conduct of the Puja. The small children of the Hanuman Colony participated in the dance and musical concert that aroused the feeling of devotion creating a happy and hilarious ambience in the entire town. The organisation of Prasad Sevan for all the devotees was reported to have been found peaceful. The committee members including women and children extended their loyalty and dedication. The musical concert under the leadership of Dhiren Mohan Pattnaik was an event of ever remembrance that kept everyone attached enen to the present moment. The presence of Goutam Samantray was a great deal of inspiration for everyone. MLA Taraprasad Bahinipati was a special attraction. Colony members like Siba Samantray, Sangram Prusty, Rinku Dash, Bishu, Kalinga, Utkal, Jena Babu, Amitabh, Ramesh Babu, Suresh Babu, Ramana Babu, Laxmikant Guruji, Ritesh Mohanty, Kartik, Harihar Babu, Deepak , Nrisimha Patnaik, Dipty , Ashok Dash, Murmu Babu, Prakash Behera, Sanjay Babu, Rabi, Manash and many others made cooperation for the peaceful Conduct of the Puja.