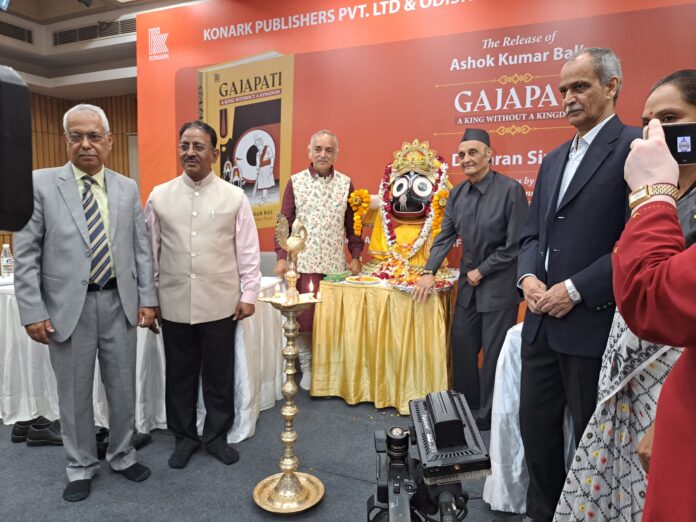 New Delhi : Odisha Forum organised a book release function of ‘Gajapati:” A king without kingdom ” yesterday at India International Centre (17th September ) at 5:30 pm. Visionary statesman, Former Union Minister , Dr Karan singh,
Puri Sri Gajapati Maharaja Sri Dibyasingha Deb,
Former I. A. S. Officer Cum President of Odisha Forum Gokul Patnaik, former Ambassador cum eminent Writer Amarendra Khatua, Ashok Bal (the author of the book )were at the dias and presented their nice speech.
Gajapati Sri Dibyasingh Deb mentioned during his address that Purushottam khetra, srimad Bhagwat have lots of similarities with Gajapati culture. This gajapati culture is derived from vedic culture and spirituality. King has to set an example.Skandha puram talks about Adya sevaka.
Dharma is the duty of the king to establish. The tradition of Seva to Lord Jagannath was started by Maharaj indradumna, and this tradition is still being continued even after so many ages.
Gajapati- initially it was the longest kingdom extending from Ganga to godavari but because of several attacks by kings , the region got diminished Former Union Minister, the visionary statesman cum culture Ambassador Dr. Karan Singh who attended this function as chief Guest mentioned that odisha is a state of heritage, arts and Culture . The beautiful classical dance “Odisii ” of odisha is very famous in the entire world. He also spoke about the hidden regional history of Odisha which needs to be rediscovered. He thanked the Author and lastly said that may the lord bless all of us.
Mr khatua, the speaker of the function said,people from different states comes to puri for Darshan of Mahaprabhu Sri Jagannath. Through this book they will be able to know about the tradition and history of Gajapati and Sri Jagannath Culture.
Secretary of the Odisha forum, Sri Ravi Pani gave the Welcome Spech and the President, Sri Patanaik introduced the Guests of the dice and spoke few Lines about odisha forum. Lastly the publisher of the book gave thank to all. So many retired I. A. S. Officers, Eminent Persons of the Society were present in this function.