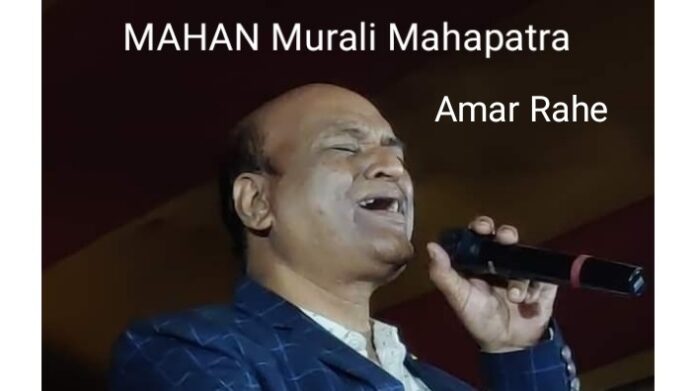 Prasanta Kumar Bishoyi (Buruea) : Murali Prasad Mahapatra, a noted singer of Jeypore subdivision of Koraput District in Odisha died with a severe heart attack. While performing his songs, such unfortunate death came to grip him for ever. The Chief Minister of Odisha Naveen Patnaik while expressing his deep condolences on his twitter handle described ” I am deeply saddened to learn about the untimely demise of the renowned singer Murali Mahapatra, all the songs being sung by him would be cherished by music lovers for ever. I pray God for the eternal soul to rest in peace and also implore Almighty to sanction strength to the bereaved family to tide over this shocking truth” Union Education Minister Dharmendra Pradhan also expressed his deep condolences on the death of Murali Mahapatra.

As per the information received , Mr Mahapatra was reported to have been participating in a musical concert of Swora Ghungura at Rajanagar square of Jeypore on the occasion of Navaratri, When his turn came for singing, he politely asked the audience to excuse him. It was because he was not feeling well so appealed the audience to accept his mistake in singing. His last song was ” Jajabara, mano mora” of late Akhaya Mahanty which he performed on the stage. After that, on the stage he fell down being fainted, without a little bit of delay, Mr.Murali was rushed to the district headquarters hospital but the doctor attending him ” declared dead”
This was a great devastation to the music lovers of Jeypore learning about the untimely death of Murali Mahapatra who , apart from being a govt employee, took passionate interest in singing. Usually, he sang the songs of Late Akhaya Mahanty. People did respect him as the Akhaya Mahanty of Jeypore. Everyone here at Jeypore became devastated with the deepest condolences on the departed soul.” Jeypore can never get such a radiant Star ever in the local musical kingdom of Jeypore as was observed people saying being extremely emotional. Mr.Mahapatra was a refined gentleman who became good book of everyone.
His school friends while expressing condolences stated ” Murali Mahapatra never missed opportunity for singing during school and college days that continued till his death was a special attraction of his personality. “Dust thou art to dust returnest was not spoken of Murali Prasad Mahapatra– The Akhaya Mahanty of Jeypore. Jeypore lost a melodious voice following which everyone feels paralyzed with shock, emotion and tears. A void can’t be imagined to be filled up with his pious departure on Mahasaptami Day of Devi Durga . Music, Songs were found present in each of his cells— Mahan Murli Mahapatra ( M-3)
Share
Facebook
Twitter
Pinterest
WhatsApp
Previous articleAn Anthology of poems,” Annanya” launched in a grand way
Next articleBharatiya Railway Mall Godam Shramik Union (BRMGSU) celebrated “Shram Samman Samaroh Utsav” across Orissa