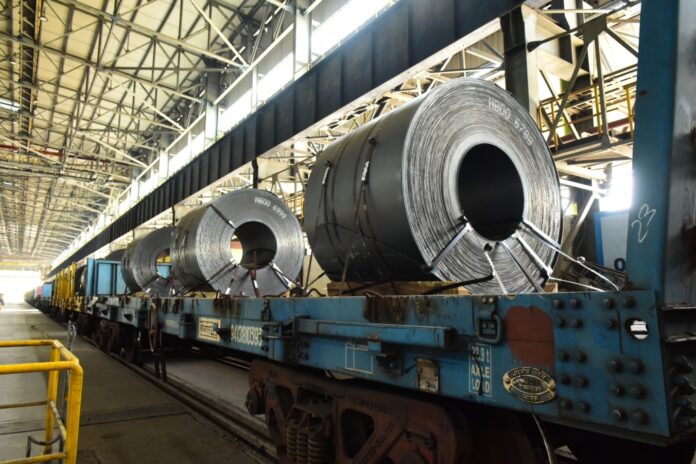 Rourkela : Rourkela Steel Plant (RSP), a unit of Maharatna Company SAIL, has registered the best ever performance in key areas in the first seven months i.e. April- October period of Financial Year 2022-23. The Steel Plant produced 2484303 tonnes of Hot Metal, 2321650 tonnes of Crude Steel and 2156872 tonnes of Saleable Steel to clock its best April-October performance in the respective areas since inception. The earlier best April- October performance in all these key areas were achieved in FY 2021-22. With an all time high production of 4108934 tonnes of sinter during the 1st seven months of the current fiscal, the Sinter Plants complemented the success story. The average Oven Pushing from Coke Oven Battery-6 also witnessed the best ever figure of 90.0 in April-October.
The dispatch of the Steel Plant also excelled in tandem with production. RSP dispatched 2160286 tonnes of Saleable Steel to clock the best ever figure in the 1st seven months since inception.
The State-of-the-art Hot Strip Mill-2 which recently surpassed the 1 Million Tonne production mark clocked the best monthly production in October, 2022 by rolling 170121 tonnes of Slabs and producing 166631 tonnes of HR Coils. The Pipe Plant (SW) made a new single day record by making 377 tonnes of pipes on 22nd October breaking a 16 year record. Soon after a similar effort by Pipe Plant (ERW) which broke a 4 decade old record by producing 552 tonnes on 25th September, 2022 .
Mr. Atanu Bhowmick, Director In-charge, RSP while chairing a production review meeting said, “Performance is the only key to success. We still have huge untapped potential. Let’s make concerted efforts in the remaining months of the current fiscal to further improve our performance in every respect and become the best in the segment in the country.”