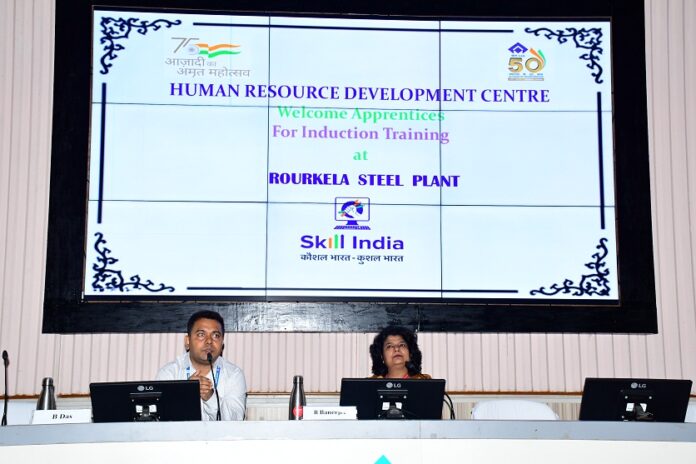 Rourkela : A three day induction workshop for first batch of Trade Apprentice commenced at Gopabandhu Auditorium of Rourkela Steel Plant on 1st November. Ms. Rajashree Banerjee, CGM (HRD), RSP and Mr. B Das, Deputy Director, Regional Directorate of Skill Development and Entrepreneurship, Bhubaneswar presided over the inaugural function. In all 200 apprentice have joined RSP, in this batch.
It may be noted that as a part of the initiatives undertaken by Rourkela Steel Plant under the Skill India Mission, Apprenticeship training is being imparted to Graduate Apprentice, Diploma Technician Apprentice and ITI Trade Apprentice where the trainees will also be provided monthly stipend. Notably this year RSP has plans to take 105 Graduate Apprentice, 271 Diploma Technician Apprentice and 285 ITI Trade Apprentice in different batches.
Addressing the trainees Ms. Banerjee gave a brief overview of the plant and RSP’s contribution in Skill India initiative of the Government. She emphasised upon safety and urged all to make the best use of the opportunity to enhance their technical expertise with utmost safety.