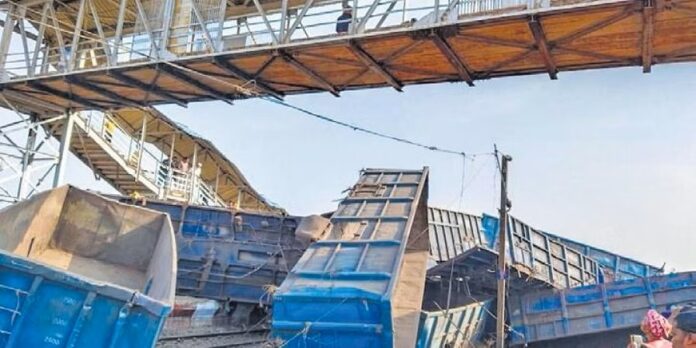 BHUBANESWAR: Even as train services resumed with speed restrictions on both up and down tracks at Korai station in Jajpur district on Tuesday, a day after the derailment of a goods train that killed three persons, four trains will not halt at the station for the next five days.
East Coast Railway (ECoR) sources said Jajpur-Keonjhar Road-Bhadrak passenger, two Cuttack-Bhadrak-Cuttack passenger specials and Bhubaneswar-Balasore-Bhubaneswar passenger special will not stop at the Korai station till November 26.
“Both the lines at Korai are fit to run the trains with speed restrictions. But four passenger specials will not stop there due to evacuation of grounded wagons from the platform,” said a railway spokesperson.
On Monday, train services were crippled along the busy Howrah-Chennai route as a goods train crashed into Korai railway station killing three women. As many as 14 wagons of the freight train derailed, ramming into the foot-over bridge, while eight of the wagons hurtled into the waiting area of the station damaging the railway station building.
The state government will provide an ex-gratia of Rs 2 lakh to each of the next of kin of the deceased and the Ministry of Railways will provide Rs 5 lakh each to the kin of those who lost their lives in the accident besides Rs 1 lakh to persons with grievous injury and Rs 25,000 for simple injury.
The Indian Railways has ordered an independent probe by the Commissioner of Railway Safety (CRS) working under the Ministry of Civil Aviation to ascertain the reasons behind the derailment. The freight train moving at a speed of 60 km to 70 km per hour was heading from Dongoaposi to Chhatrapur.
Fifteen trains were cancelled and six were partially cancelled on Monday. ECoR also diverted 21 more trains including Bhubaneswar-New Delhi Rajdhani Express and Bangalore-Howrah Duronto Express on a different route.