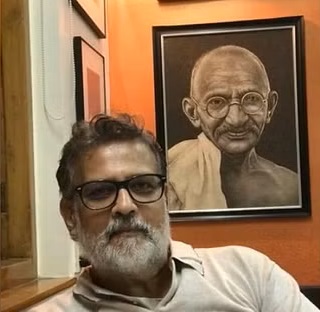 MUMBAI: Mahatma Gandhi’s grandson Tushar Gandhi alleged that RSS BJP ideologue VD Savarkar not only helped the Britishers but he also helped Nathuram Godse to get an efficient gun to murder the Bapu, Mahatma Gandhi.
The VD Savarkar controversy is unlikely to die soon. After Rahul Gandhi’s allegations that VD Savarkar filed the mercy petitions while other freedom fighters sacrificed their lives. Mr Gandhi alleged BJP RSS ideologue was against the freedom of India, he took pensions from Britishers and even helped them.
Then, Tushar Gandhi who walked with Rahul Gandhi in Bharat Jodi Yatra in Buldhana district levelled another serious allegation against VD Savarkar. Mahatma Gandhi’s grandson on social media stated, “Savarkar not only helped the British, but he also helped Nathuram Godse find an efficient gun to murder Bapu. Till two days before Bapu’s Murder, Godse did not have a reliable weapon to carry out the murder of M. K. Gandhi”.
Tushar Gandhi further said, “When in 1930s several attempts were made on Bapu’s life. Prabodhankar Thackerey forewarned Bapu’s companions about a plot to kill Bapu in Akola, Vidarbha and saved Bapu’s life. He then issued a public warning to Sanatani Hindu organisations & their leadership in Maharashtra to desist from their murderous attacks on Bapu.”
“Savarkar actively helped the British during the Second World War. He continued doing so even after knowing that Netaji Subhash Chandra Bose and his INA were fighting the British, this is an undeniable historic fact,” Tushar Gandhi added on his social media account.
Reacting to Uddhav Thackeray’s disassociating Rahul Gandhi’s remark against VD Savarkar for filing a mercy petition and helping Britishers, Tushar Gandhi said “Savarkar and Hedgewar were leaders of Sanatani Hindus this Prabodhankar’s warning was addressed to them, Shiv Sena Uddhav Balasaheb Thackerey, must be reminded of this bit of their history.
Maharashtra Congress president Nana Patole said that VD Savarkar’s writing is objectionable. He said Savarkar in his controversial book, ‘Six Glorious Epoch’ stated that Chhatrapati Shivaji Maharaj’s son Sambhaji Maharaj was unfit to carry forward the legacy of Shivaji Maharaj and even called him unfit as a king to run the Maratha kingdom, calling him drunkard, womanizer and short-tempered.