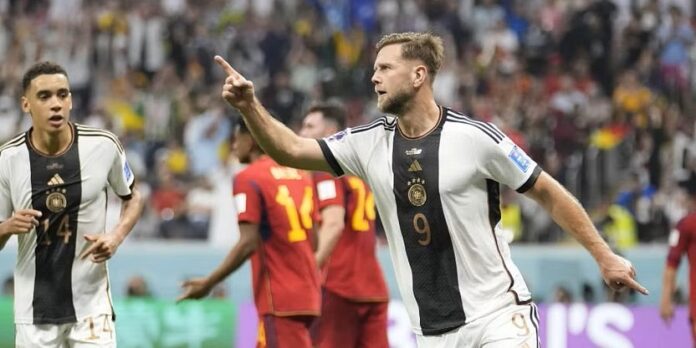 DOHA: Germany can heave a sigh of relief. It was billed as one of the highlight games of the group stages and at the Al Bayt Stadium, Spain and Germany did not disappoint. Of course Japan and Costa Rica helped, setting up the Group E tie in a manner that all but eliminated the possibility of the two European sides playing out an organised and insipid 90+ minutes, having already secured progression in the tournament. Both Germany’s coach Hansi Flick and Spain’s Luis Enrique, as well as man of the match Alvaro Morata (how do they decide a goalscorer is the best player on the pitch in a 1–1 draw?), made multiple mentions of the nature of the tournament and the problems the ‘other’ two sides have created in what would have normally been seen as a straightforward group. After two rounds of games, nothing is straightforward about Group E.

Despite losing their first game against Japan and drawing this fixture, Germany are still alive after Costa Rica beat Japan earlier in the day.

From the opening whistle the quality, intensity and desire was on view from both teams. Spain looked supremely confident. Within 30 minutes they had clocked over 250 passes and appeared to have the composure, ability and gameplan to send Germany home well before most pundits might have called time on Die Mannschaft. Exemplified by Aymeric LAporte’s no-look header back to his goalkeeper, Unai Simon, in the 18th minute, Spain looked in cruise control. Playing with characteristic fluidity, while at the same time pressing hard, it seemed only a matter of time. But football is not always what you see at eye-level. German coach Flick made this point several times in the press conference after the game. Below the surface, Germany’s determination and dictation of the pace, particularly at critical junctures of the game, had far more impact on the result than the casual observer might imagine. It perhaps even forced him to show his hand first, making changes that had mixed impact.

The introduction of Alvaro Morata by Spain fairly early, in the 53rd minute, to replace Ferran Torres, yielded immediate fruit. The centre forward, a rare breed, did what he was brought on for, finding the net with a deliberate and perfectly weighted touch with the outside of his foot at the end of a Jordi Alba cross to put Spain ahead and reinforce the illusion of control. But Germany have never lost back-to-back World Cup group-stage games. And Sunday night would not prove a first.

In the last 20 minutes, the dynamics changed almost entirely. Flick made his set of changes, bringing on Leroy Sane and Nicklas Fullkrug (another old-school centre forward complete with the build of a boxer and the corresponding gap tooth). Together with Jamal Musiala, who is fast establishing himself as among the most striking talents in the world of football at the age of 19, the trio turned the pressure on the Spaniards.

Enrique had to face the flak from the assembled Spanish press. When asked about the changes he chose to deflect saying hindsight can’t be used to judge those decisions and that all 26 players have to play their best. “When you have the opportunity to win and you don’t, it’s a sad moment,” he said. “But we are still on top of the classification and we have to take that as a positive.”

For Flick the scenario was not much different. After the defeat to Japan this result was far better and reflected in both the questions and answers after the game. He acknowledged the beauty in the way Spain played much of the game and the philosophy Enrique instills in the side. “Spain are a great team with a good mix of players, lots of young talent and experience. I like how they play,” he said. “But we pushed against them; we pushed hard. There was a shift in the game. It was very difficult to defend and we need to improve. But we are more than happy with the performance.”

From a neutral perspective we couldn’t have hoped for more on Sunday night. The game produced enough to keep millions of us glued to every minute of the action. And yet the result leaves the door wide open for all four teams in the group ahead of the last round of matches, which is something that can be said of most of the tournament. Brazil, Portugal and Switzerland are the only three teams left that can still make it two wins out of two and secure early progression to the next round. For the rest, the World Cup remains wide open.

And, as Enrique and Flick reminded us on Sunday night, it was a brief return to a plane on which football exists as a space of love and joy far away from the realities of the real world. For that, perhaps, neutral fans all over the world will be giving their thanks.