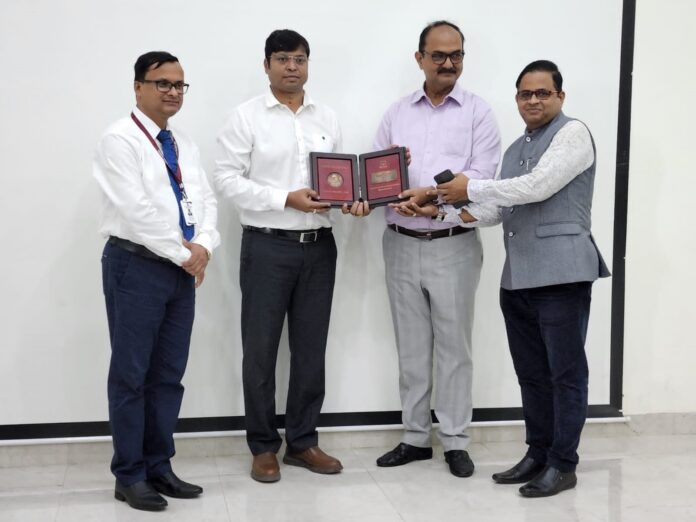 Bhubaneswar (Bureau) : With an aim to encourage the students to instill physical activity and sports in their everyday routine, the Aditya Birla Public School Bhubaneswar launched a plethora of activities on the theme- HUM FIT TOH INDIA FIT on 23rd August 2022under the guidance of the Principal Mr. L.N Dash. The objective of the programmewas to endeavor to alter the students’ behavior from passive screen time to active field time.
In this context, the school conducted a special programme in the AV Hall of the schoolon, 25th Aug 2022.Padma Shri & Arjuna Awardee Mr. Dilip Tirkey, Ex Captain of Indian Hockey Team and Chairman, Odisha Hockey Promotion Council graced the occasion as Chief Guest along with Mr. Ardhendu Mohapatra, President, Corporate Affairs and Dr. Bibhudatta Mahapatra, Vice President,Corporate Communications & CSR of Aditya Birla Group.
The Principal of the school, Mr. L.N Dash welcomed the Chief Guest Mr. Tirkey with bouquet.The school dance troupe presented a beautiful dance of Aditya Vandana hymn in front of the guests whereas the school choir sang a melodious welcome song for the guestsunder the guidance of Mr. Gyaneshwar Pandey,Ms. Rituparna Chatterjeeand Ms. Namrata Gupta.
In his address, the Chief Guest Mr. Dilip Tirkey discussed the importance of fitness and role of sports in the life of students. He has explained about the facilities provided by the Govt of Odisha to promote hockey and encouraged the children to take part in sports every day. The students were curious to know more on world cup hockey and his experience in leading Indian Hockey team.
Keeping in mind of the interest of the students, a question answer session was held with Mr. Tirkey. The students had interacted with him and asked questions about his achievement during school days,mantra to stay fit andplan to promote hockey in Odishaetc. The proramme was concluded with the vote of thanks by Chandresh Shah, Vice Principal of the school and co-ordinated by the Administrative Officer, Mr. N. Sahu. It was really an out-of-the-world experience for Adityans.