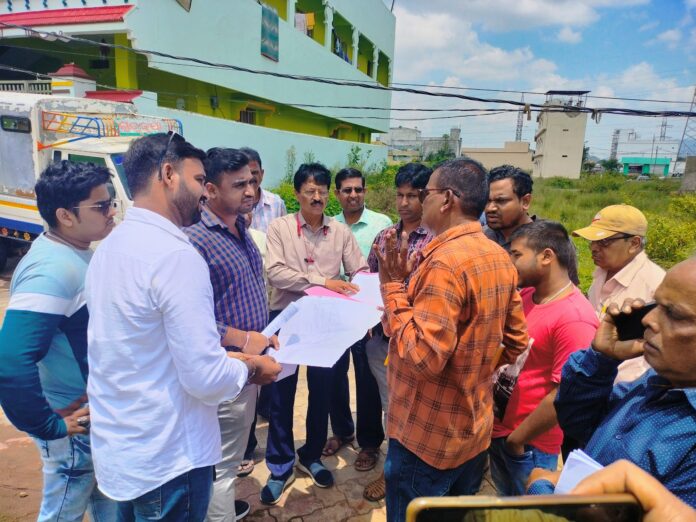 Buruea Chief PKB: The local residents of Prakash Nagar, Jeypore located behind the Glocal Hospital powerhouse colony have been drawing attention of the Tahsildar and Executive Officer for the allegedly occupying of the open space of their areas. The open space is meant for recreational activities but some plot mafias are allegedly found selling those areas to some innocent people as allegedly stated by the residents. People have submitted a memorandum to the grievance redressal cell of Chief Minister and also to the District Collector, Koraput appealing for action.
It was reported that the plot no 808 khata no-114 Subplot no- 94,95,99 and 100 are marked as open space for public utility in prakash nagar but Subplot no-100 had been earlier sold illegally. Now, some mafias are allegedly trying to sell out the remaining Open Space of the municipality. On Monday morning, the executive officer Siddharth Patnaik along with the local counsellor Vishnu Prasad Reddy, receiving the complaints, visited the spot. While stating to the media, the executive officer has assured of strong action if open space being occupied illegally. The residents of Prakash Nagar Jeypore have drawn attention of Executive Officer Jeypore Municipality for early settlement of the issue. Otherwise, the land mafias would sell out the open space for easy collection of money as agrivedly told by the residents of Prakash Nagar.