Kendriya vidyalaya memorandum submitted to Governor of Odisha from Jeypore 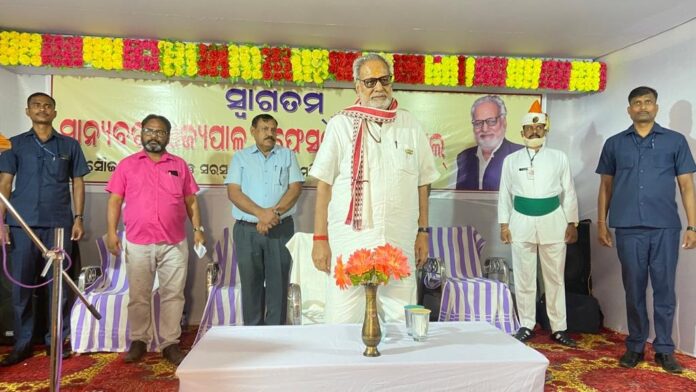 Buruea Head PKB: His Excellency The Governor of Odisha Shri Ganashi Lal visited to Koraput District on the occasion of Azadi Ka Amrit Mahotsav for two days. Yesterday, being the guest at Central University and SCITM Engg college and today at Kundra and Jeypore Sasaswati Sisu Vidya Mandir, he participated and interacted with the students of essay competition.
During his visit to Jeypore, he was submitted a request letter for the establishment of Kendriya Vidyalaya at Jeypore. Notably, the issue of Jeypore kendriya vidyalaya is not finding any progress following which lots of resentment has started taking place. While the memorandum of kendriya vidyalaya was submitted to Prof.Ganashi Lal by the intellectual groups and media personnel, everyone present on the occasion appreciated the stand keeping high expectation that it would be materialized soon. The letter was submitted by Tarun Kumar Mahapatra, Rajendra Gouda , Bala Ray, Ganga Nanda, Chandrakant Sutar, Santosh Kumar, Dr.Suresh Dash, Ramesh Babu, and many others.
As per the information received, the memorandum submitted categorically stated that In spite of appeals time and over again, the dream of kendriya vidyalaya here at Jeypore is neglected.. The BJP govt at centre doesn’t bother for the implementation of the KV issue. Our odia central minister Dharmendra Pradhan leads the education department at centre but still it is relegated to the background. Odisha govt has sanctioned temporary building along with eight acres of land . So in spite of the possession all central govt organisations, our people are deprived of kendriya vidyalaya is not only a matter of concern but speaks largely about the negligence of the central government in the centre, the general people disgustingly utters.