Like Delhi, Punjab to soon get freedom for stubble burning; Delhi Government and Punjab Government working in tandem to implementing Pusa Bio-decomposer spray solution across Punjab 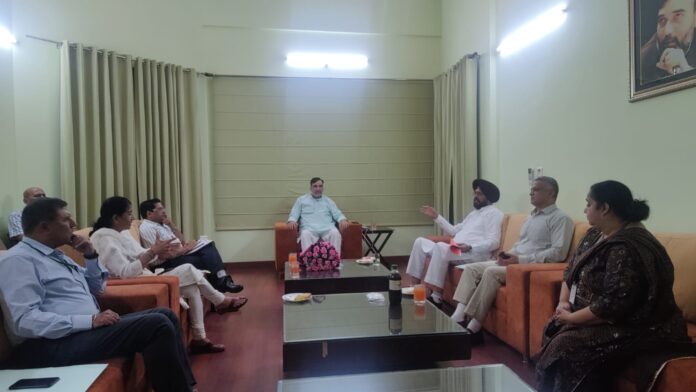 Development Minister Shri Gopal Rai held a meeting with the Punjab Agriculture Minister Sardar Kuldeep Singh Dhaliwal and experts from the Indian Agricultural Research Institute (PUSA) to discuss the problem of air pollution from stubble burning. After the meeting, it was decided that in light of the successful use of bio-decomposer for stubble decomposing in Delhi, a pilot project of spraying free bio-decomposer would be run in some areas of Punjab. After evaluating the results of the pilot project, a decision regarding spraying decomposers in all the agricultural fields of Punjab will be finalised.

Development Minister Shri Gopal Rai said, “Paddy is cultivated in very few areas of Delhi. The Delhi Government sprayed free bio-decomposer last year to prevent pollution from stubble burning in Delhi. The initiative was highly successful. The process resulted in decomposition of stubble and resulted in an increase in soil’s fertility. The Delhi Government will once again spray bio-decomposer on paddy fields, both Basmati and non-Basmati, this year. Farmers face a challenge due to only a short gap between paddy harvest and wheat planting. The Delhi Government has already begun preparing for spraying bio-decompose so that the whole process is completed smoothly and the farmers get the best possible outcomes from it.

Shri Gopal Rai concluded, “Bio-decomposer works similarly to organic manure and it improves soil fertility and productivity. This reduces dependence on fertilisers and then lesser fertiliser is needed. Stubble burning not only pollutes the environment, it also lowers soil fertility as it kills beneficial microbes and fungi. Spraying bio-decomposers is not only an environmentally friendly process but it is effective, efficient, cheap, and productive as well.”

Agriculture Minister of Punjab Shri Kuldeep Singh Dhaliwal said, “Indian Agricultural Research Institute (PUSA) has been asked to take all necessary measures regarding the spraying of bio-decomposer. Punjab Government is running a pilot project and bio-decomposer is being provided at free of cost. The institute will prepare a detailed plan to ensure that the project is completed on time. A pilot project to spray free Bio-Decomposer in the agricultural fields will be run in Punjab under the supervision of the Indian Agricultural Research Institute (PUSA). The Punjab Government is launching this initiative for the first time, therefore it will be tested in some areas, before expanding it to the entire state. The Government will also launch a campaign to educate farmers on the use of bio-decomposer spray.”