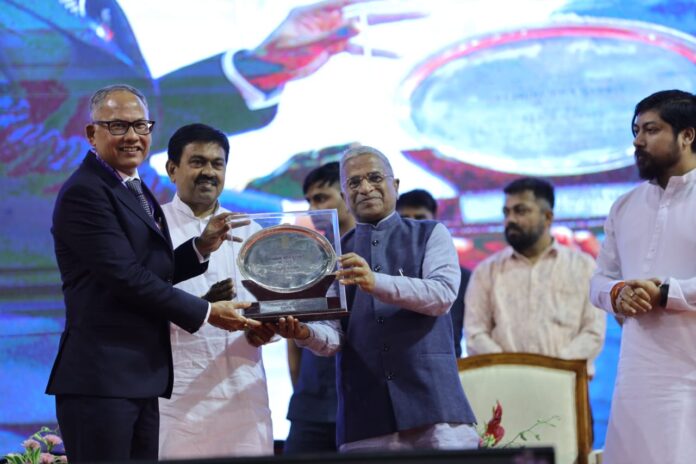 Hyderabad, 15 September 2022: NMDC received the Rajbhasha Kirti Award for
2021-22 at the Hindi Diwas Samaroh organized by the official language Department,
Ministry of Home Affairs, Government of India in Surat today. Shri Amit Shah,
Honorable Minister of Home Affairs and Minister of Co-operation of India, was
present at the event and lauded the contribution of Corporates in preserving and
celebrating the Hindi language.
NMDC was conferred with Rajbhasha Kirti – third prize in the category of Public
Sector Undertakings located in Region ‘C’. Shri Sumit Deb, NMDC Chairman and
Managing Director, received the award from Shri Harivansh Narayan Singh,
Honorable Deputy Chairman of Rajya Sabha. Union Minister of State for Home
Affairs Shri Nisith Pramanik, Union Minister of State for Home Affairs Shri Ajay
Kumar Mishra, Members of Parliamentary Committee on Official Language, and
Senior Officials of the Government of India’s Department of Official Language were
also present at the Hindi Diwas Samaroh.
In 2021, NMDC’s efforts in promoting the Rajbhasha were recognized with the
Ministry of Steel’s Ispat Rajbhasha Samman and the First Position in its category
from the Town Official Language Implementation Committee, Hyderabad. In 2021
NMDC’s house journal ‘Khanij Bharati’ that encourages creative and technical
writing in Hindi also received the First Position in the Published Magazine category.
Shri Sumit Deb on this occasion said that, “On this great celebration of Hindi Day, let
us take a pledge that we will contribute our best to establish Hindi and Indian
languages at their glorious place in the time of Azadi ka Amrit Mahotsav.”