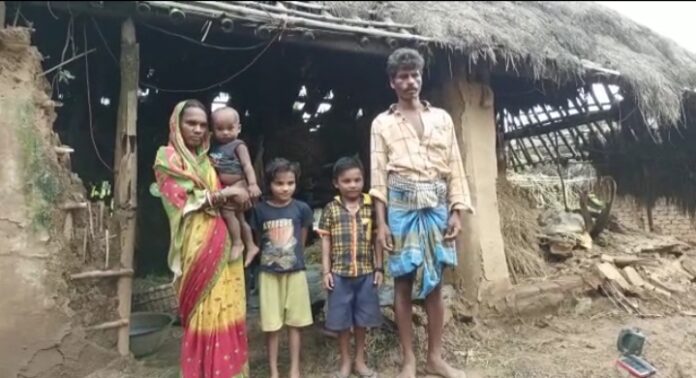 Jajpur, Pratap Prusty : There are a bundles of welfare schemes of Government for the poor and underprivileged. The Pradhan Mantri Gramin Awas Yojana (Prime Minister Rural Housing Scheme), previously Indira Awas Yojana was launched by the Government of India to provide housing for the poor and the underprivileged sections in an aim to upgrade every kutcha houses to pucca houses. But this sort of schemes have been a pipe dream for many poors like Sushanta, a resident of Bhanra G.P of Bari Block, Jajpur. As reported, Sushanta Jena, a daily wage earner, who has three children and wife in his family, miserably lives in a kutcha house. All of sudden, the torrential rain has pushed Sushanta and his family to take shelter in the cattle shed. The house wall of Sushanta collapsed in the heavy rain, luckily the poor family had a narrow escape from the sure casualty. Now, his damaged house is lying abandoned and the family is spending nights under polythene roof.

It is alleged that Sushanta has approached to many netas (political leader) including the Sarpanch of his G.P to the higher authority but the administration has turned deaf. Sushanta has been despair to see the pipe dream, he is illiterate, he doesn’t know his rights, even he doesn’t know how to hold pen. The suffering life story of Susanta is not the painful one but it makes mockery over the state government’s 5T initiative, in which transparency is one of the ‘T’. There are so many Sushantas in the society whose scream doesn’t reach to the administration’s ears. It is only left to see how the impact of this report works.