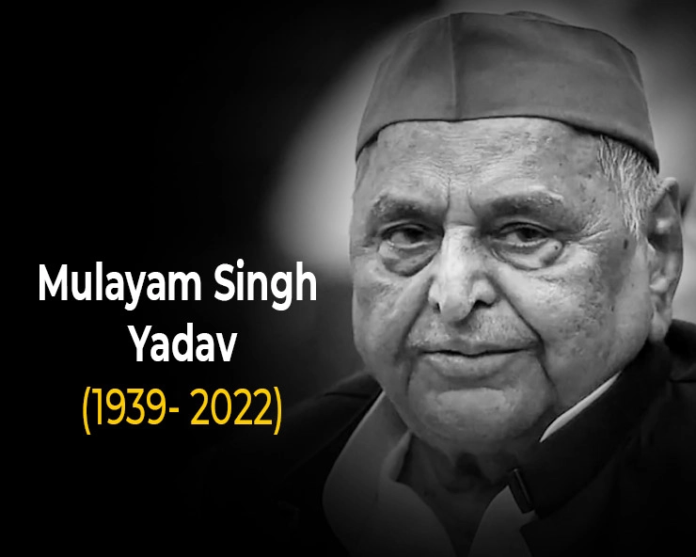 Prime Minister Narendra Modi condoled the death of Yadav as he hailed his “remarkable personality”. In a tweet, the Prime Minister said, “Mulayam Singh Yadav Ji was a remarkable personality. He was widely admired as a humble and grounded leader who was sensitive to people’s problems. He served people diligently and devoted his life towards popularising the ideals of Loknayak JP and Dr. Lohia.”

Yadav, also known as ‘Netaji’ among his followers and party workers, is survived by Akhilesh Yadav, who is currently the SP chief and also a former chief minister of UP. Akhilesh is the son of the SP patriarch’s first wife Malti Devi, who died in 2003.

The veteran politician was admitted to Medanta Hospital on August 22. Yadav had been on life-saving drugs due to his extremely critical condition in the last few days.

However, after his condition deteriorated, he was put on ventilator and admitted to the intensive care unit (ICU) at the hospital on October 2. He was being treated by a “comprehensive team of specialists”.

According to Medanta Hospital, Mulayam Singh Yadav had serious lung and kidney issues. He had reportedly been facing difficulties in breathing and also went through dialysis for his kidney problems.

The SP patriarch had been suffering from various health-related ailments for the past three years and his public appearance had been restricted in recent years.

He also held the post of Defence Minister from 1996-1998. He had been elected to the UP legislative assembly ten times and seven times as Lok Sabha MP.

Mulayam Singh Yadav won his first election to the Uttar Pradesh Legislative Assembly in 1967. Yadav was elected Chief Minister of Uttar Pradesh for the first time in 1989.