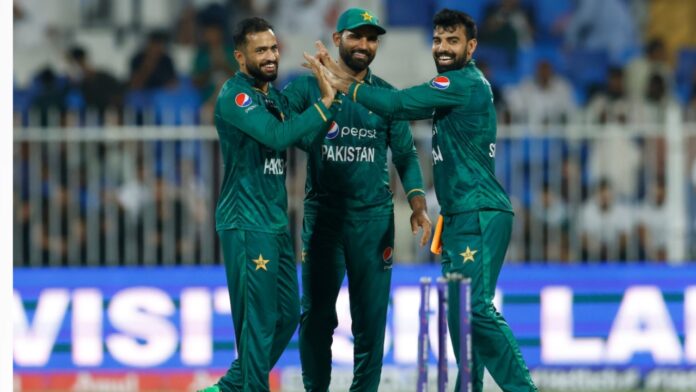 NF Times, Pratap Prusty : An unbeaten 45 of 20 ball by Mohammad Nawaz with classical 50s by both Md. Rizwan and Babar Azam helped Pakistan to register a 7 wickets victory over Bangladesh with just a ball spared in the last league of the tri-series at Christchurch. In the other hand, the solid 50s of Shakib Al Hasan (68 of 42) and Litton Das (69 of 42) of Bangladesh had gone in vain.In the early, by the simultaneous 50s of Litton Das and Sakib Al Hassan, Bangladesh set their highest total in the triangular series (173/6) against Pakistan. In chasing, Babar Azam and Mohammad Rizwan set up the platform with their eighth century stand in T20Is, but Pakistan did not run away with the chase because of some disciplined bowling from Bangladesh. It was all about the Mohammad Nawaz’s game changer knock (45 of 20 ball, S/R-225) that helped Pakistan to easily achieve the Target with just a ball remained.
In the first innings, Bangladesh tried another new opening pair with Soumya Sarkar partnering Najmul Hossain Shanto but they once again lost an early wicket. That brought in Litton at No. 3 but he suffered a muscle strain early in his innings, which suggested that he would not be able to bat much longer. Instead, his inability to run fluently freed him up and he relied on hand-eye coordination to dominate a young Pakistan pace attack comprising Naseem Shah, Mohammad Hasnain and Mohammad Wasim.
Soon after the trouble, Litton’s muscle strain seemed to go away, and he built an 88-run stand for the third wicket with Shakib Al Hasan, who batted until the penultimate over to score his second consecutive fifty in the tri-series. He used his feet to get to the pitch of the spinners and exploited the leg side in the slog overs. Bangladesh, however, could score only six runs off the last eight balls after Shakib was dismissed and Bangladesh inished on 173.
To push Pakistan back foot, Bangladesh’s most inexperienced medium-pacer Hasan Mahmud who impressed the mos tooking 2 for 27 in four overs and did not allow Pakistan’s openers Babar Azam and Mohammad Rizwan to dominate him.Taskin Ahmed and Shoriful Islam also used changes of pace to force mis-hits from the batters, and though Babar and Rizwan raised their century stand in the 13th over, the game remained in the balance.
In his last spell, Mahmud dismissed Babar and Haider Ali in the same over, which fuelled Bangladesh’s hopes of victory. What they needed was a couple of tidy overs, perhaps with another wicket before the death, but it wasn’t to be as Rizwan stayed steady while Nawaz found the boundary early in his innings. Mohammad Saifuddin was the weak link in the Bangladesh attack on the day, conceding 53 runs, and Nawaz and Rizwan entered the slog overs with momentum on their side.Though Rizwan fell in the 19th over, Nawaz played the field, hitting the ball into gaps and milking a hat-trick of twos to shut Bangladesh out in the final over. He ended the contest with a boundary off the penultimate ball of the match.