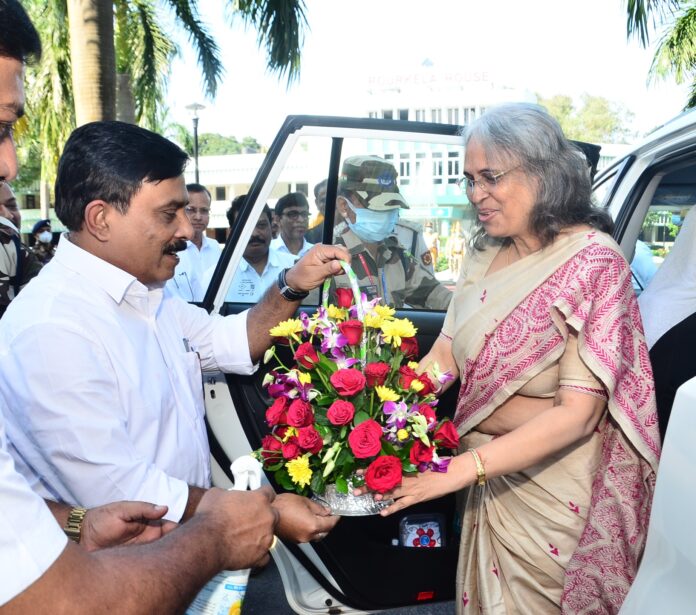 Rourkela : Ms. Soma Mondal, Chairman, Steel Authority of India Limited (SAIL) arrived at Rourkela on a 2-day visit to Rourkela Steel Plant (RSP) on 13th October, 2022. She was received at Rourkela house by Mr. Atanu Bhowmick, Director In-Charge, as well as Executive Directors and other Senior Officers of the Plant. She was accorded a Guard of Honour by the CISF Contingent at Rourkela House.
Soon after her arrival Ms. Mondal proceeded to the steel plant where she inaugurated the 4 Million Litre Per Day (MLD) Sewerage Treatment Plant (STP) located near the Solar Plant. Notably, the new major environment friendly facility constructed at a cost of Rs. 14.91 Crore is based on Moving Bed Bio Reactor (MBBR) technology to meet the latest norms stipulated by the Central and State Pollution Control Boards for discharge of treated sewerage.
Thereafter the Chairman visited Raw Materials Handling Plant (RMHP), Sintering Plant-3 and Coke Ovens Battery-6. She reviewed the performance of the respective units and also interacted with the employees. Ms. Mondal also inspected the Pellet Plant Site at RMHP. Later during the day, she presided over a high level meeting of Senior Officers of the plant at the ‘Manthan’ Conference Hall. It was attended by the DIC, all the EDs, CGMs, HoDs and other Senior Officers of the plant. She took stock of the overall performance of the plant and interacted with the Senior Officers regarding the future road map.