“Create a leader within each one of you in every activity of yours,” exhorts Chairman, SAIL to the young executives 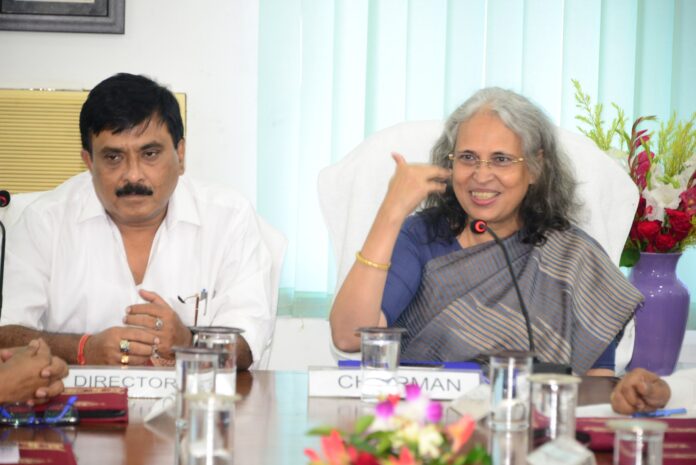 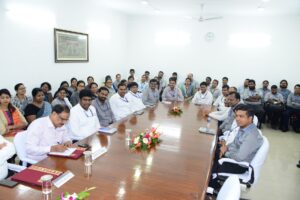 : “The mantra is to work hard in a focussed manner and instead of looking for leadership from the top at all times, create a leader within each one of you in every activity of yours,” exhorted Mrs. Soma Mondal, Chairman, SAIL, as she interacted with a cross-section of young executives of Rourkela Steel Plant (RSP) at Rourkela House on 14th October. The meeting was attended by Mr. Atanu Bhowmick, Director In-Charge, Mr. S R Suryawanshi, ED (Works), Mr. P K Satapathy, ED (P&A), Mr. P K Sahoo, ED (Projects), Mr. Somnath Tripathy, ED (MM), Dr. B K Hota, ED (M&HS) and Mr. A K Behuria, CGM Incharge (F&A) RSP. Notably, the SAIL Chairman had reached Rourkela on a two-day visit on 13th October, 2022.
In her inspiring address Chairman SAIL said, “The talented young generation which is brimming with energy and confidence will take RSP and SAIL to new heights with the guidance of the experienced hands.” Stressing on the need to adhere to safe working practices, Chairman emphasized on the utmost importance of safety and said, “We have to inculcate safety in our DNA and develop a culture. Safety has to be part of our every activity each day. RSP has to lead by setting an example for other units.” She also added that growth can be achieved through hard-work, smart-work and teamwork. Mrs. Mondal elaborated about the priorities of the company and focused on key areas to further improve. She also stressed on strengthening digitization system in RSP and make it a world Class Corporation producing green steel. An open house interaction was held later in which the SAIL Chief interacted with all the participants.
Mr. Atanu Bhowmick in his address spoke about the targets and challenges in front of the young executives and assured the SAIL Chief that RSP would be fulfilling all the expectations of the SAIL management.
At the outset, Mr.N.C.Panda, DGM(Personnel) while welcoming the Chairman SAIL and other dignitaries, assured them that RSP collective shall do all that is needed to face the challenges.
The visit of Mrs. Soma Mondal to RSP as Chairman was also marked by a tree plantation by her and Mr Bhowmick at Rourkela House. Earlier during the day, the SAIL Chairman held discussions with representatives of Trade Unions, Executive Association and local Industry leaders.
Share
Facebook
Twitter
Pinterest
WhatsApp
Previous articleBring home prosperity with ‘Dhanteras Store’ on Amazon.in
Next articleMajor step taken by SAIL, Rourkela Steel Plant in the field of Environment Management : State-of-the-art Sewage Treatment Plant inaugurated by Chairman, SAIL