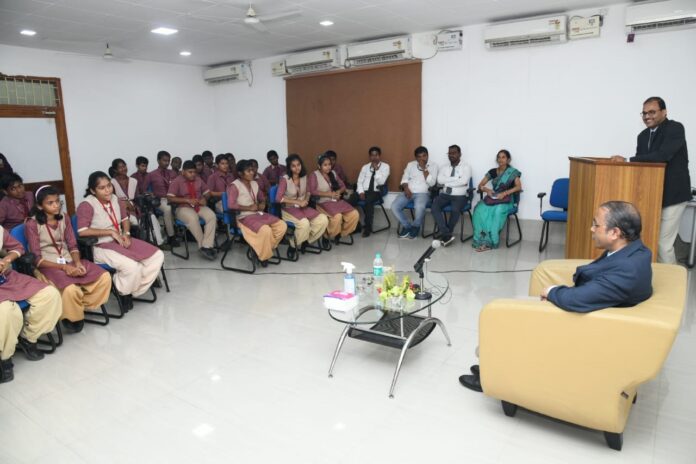 The High Court of Orissa has, on 16th October, 2022, organized a visit of thirty-four students of 9 th & 10th class of Laxmi Narayan Public School, Sahada, Bhadrak to its premises. On the Children’s Day, 2021, the premises of High Court were, for the first time, opened for children. Since then students of many institutions including hearing and speech impaired and visually challenged children have visited the High Court and its allied institutions like Odisha State Legal Services Authority and Odisha Judicial Academy.
On 16th October students of 2nd Semester 9th & 10th class from Laxmi Narayan Public School, Sahada, Bhadrak and their teachers visited the High Court premises at Cuttack. Lawyers Ms. Kajal Sahoo and Mr. Sailaja Nandan Das were present on the occasion. They explained various aspects of judicial functioning to the students. The students saw the Chief Justice’s Courts and Chambers in the Heritage Building and the New Building of the High Court, Judges’ Library and the Conference Halls. They put queries which were answered by the lawyers. The students were shown video clips of swearing-inceremony of Judges and explained the procedure involved therein. Video clip of the hearing of one Public Interest Litigation was also played for viewing of the students in the Chief Justice’s court room.
The students also visited Aain Seva Bhawan which houses the Odisha State Legal Services Authority and the High Court’s Arbitration and Mediation Centers where they were sensitized about the Alternative Dispute Redressal (ADR) mechanism and its contribution in redressal of the grievances of poor litigants. At Odisha Judicial Academy the students were given idea about various kinds of training programmes designed for the lawyers and Judges. They also interacted with Justice M. S. Raman who shared with them his experience as lawyer and explained how Civil and Criminal Courts function in effective administration of Justice. Discussion over hierarchy of Courts in subordinate judiciary, its jurisdiction (subject matter, pecuniary and territorial) and functioning clarified some of the basic doubt of the students. Justice Raman discussed on the definition of law and functioning of the three organs of government i.e. the Legislature, the Executive, and the Judiciary. He stated that Legislature is vested with the power to enact laws, but it must be in conformity with the constitutional mandate. Similarly Executive is vested with the power to implement the laws and policies adopted by the Government. The Judiciary, being the watchdog of democracy, interprets the laws and settles the disputes.Justice Raman discussed on the writ jurisdiction of High Courts and Supreme Court. The writ jurisdiction of the High Court is much wider than the writ jurisdiction of Supreme Court as the Supreme Court can issue writs to enforce fundamental rights only, but the High Court can issue writs for variety of issues including enforcement of fundamental rights.He also discussed on the functioning of Alternative Dispute Resolution Mechanism as a tool to reduce burden on Courts and a cost effective and less time consuming measure for expeditious disposal of cases with less complex proceedings than the Court system. Though there had been visits of students from Schools including differently abled children to High Court in the past, this is the occasion when students from the far flung place of the State visited the High Court of Orissa. The purpose of organizing such visits is to bring transparency about the real functioning of judiciary which is different from the myths prevailing in the society.