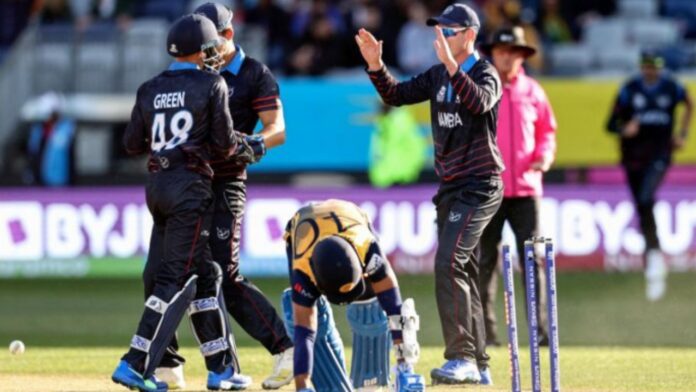 NF Times, Pratap Prusty : Unexpectedly, the weak Namibia had stunned the cricket fans by beating Sri Lanka in their first T20 World Cup 2022 group match. The Lankans defeat in the match could have huge ramifications in the tournament, especially in India’s group.Namibia handed a 55-run defeat to Sri Lanka in their T20 World Cup 2022 opener.The Super 12 round of the T20 World Cup 2022 is yet to begin but cricket fans all over the globe have their eyes set on the qualifiers from which 4 teams are to progress. The likes of Sri Lanka, West Indies, Namibia, Scotland, Ireland, Netherlands, UAE and Zimbabwe are already battling it out for the 4 vacant spots in the Super 12s. While Sri Lanka, West Indies, and Ireland are arguably the favourites to go through, the match between the Lankans and Namibia on the opening day of the tournament itself has been an eye-opener.
On Sunday, the opening day of the T20 World Cup 2022, Sri Lanka suffered a stunning 55-run defeat at the hands of Namibia at Geelong. Chasing a target of 164 runs, the Lankans were bamboozled by the Namibian bowlers. Barring Dasun Shanka’s 29 and Bhanuka Rajapksa’s 20, none of the Sri Lankan batters even crossed the 20-run mark.
The fact that Sri Lanka, reigning Asia Cup champions, can be beaten by a team like Namibia has blown the entire tournament wide open.But, this defeat of Sri Lanka can have huge ramifications on the entire tournament. As per the rules, the top two teams from the two qualifier groups will enter the Super 12s.As far as India’s group is concerned, which has the likes of Pakistan, South Africa and Bangladesh, the winner of Group B and the runner-up of the Group A is to join them.
West Indies are the favourites to win the Group B while the Group A could now see Sri Lanka taking the runners-up spot, courtesy of their defeat against Namibia.Hence, India’s group could see an intense battle for the top spots, between Rohit Sharma’s men, Pakistan, West Indies and Sri Lanka. It has to be noted that the Lankans had recently beaten India in the Asia Cup to book a spot in the final.