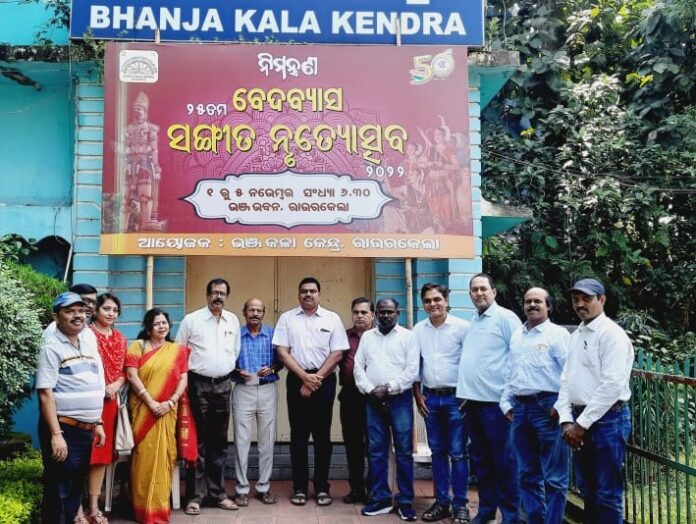 Rourkela : The poster of the 25th edition of Vedvyas Sangeet Nrutyotsav, the biggest cultural festival of the region was released on 16th October, 2022 in a function organized at Bhanja Kala Kendra, in the Steel City Rourkela. Mr. S S RayChowdhury, CGM (RMHP), SAIL, RSP & President, Bhanja Kala Kendra, Mr. Alok Behera, Vice President, Mr. Radhakrushna Mohapatra, General Secretary and other office bearers of Bhanja Kala Kendra were present on the occasion. It is noteworthy that the 5-day festival which is one of the popular cultural events of the state, is held in the open-air stage of Bhanja Bhavan. The huge stage will reverberate with rhythms of Indian classical, folk & tribal music as the festival is set to begin on November 1st. Many renowned exponents of the country will congregate in the Steel City to showcase their artistic brilliance in the cultural confluence that has few parallels in the region. It is noteworthy that the grand festival has been able to usher a cultural renaissance in this part of the state. Each day of the festival is dedicated to one of the forms of Indian Classical Dance and Music, Folk Dance and Tribal Dance exhibiting the best of our rich and diverse heritage. This year’s festival bears more significance as the nation celebrates ‘Azadi Ka Amrit Mahotsav’ to celebrate 75 Glorious Years of Indian Independence. The festival will also pay tribute to all the legends of performing arts who have made invaluable contributions in enriching art & culture of the country. The institution will also publish the widely circulated annual Souvenir and a book “Tribhangi” containing valued articles/essays from eminent Writers, Poets, Critics & Research Scholars during the festival.
The objective of the festival is also to promote tourism in this part of the state known as the sylvan paradise which has abundance of natural beauty to explore.