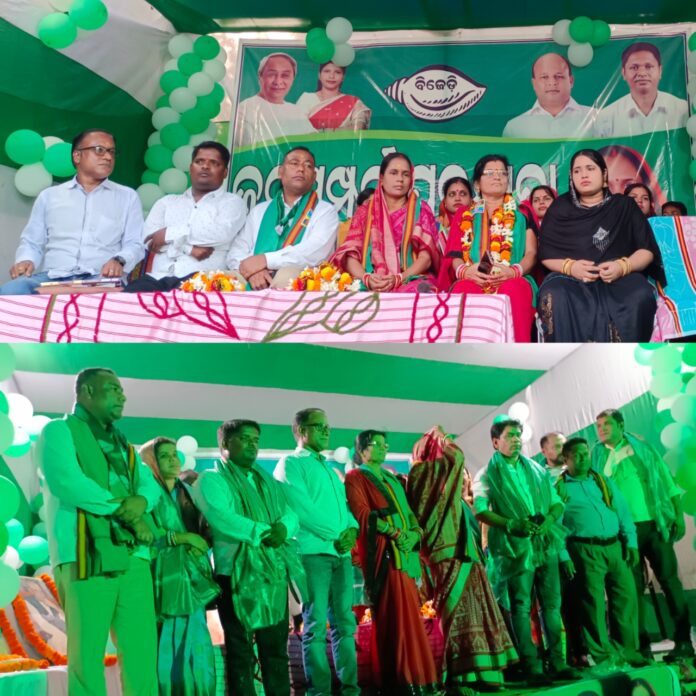 Jajpur, Pratap Prusty : The cold war inside the BJD Party in Bari Constituency has been exposed in public. The matter had come in the public notice, when hundreds of rebel party workers staged protest against their commander and demanded resignation of the MLA Mrs. Sunanda Das commenting controversial statement against her at the Alapua village of Arthanga Pachayat on 12.10.2022 in the 36 No. Zone.
Simultaneously, to thwart the rebels’ spark, MLA, Bari, Mrs. Sunanda Das called her supporters to join her campaign – the Jansampark Padyatra held at Atalapur Panchayat of Rasulpur, Jajpur on 17.10.2022 . The Public marching was started from the Gopinath Jew Temple of Balipatna and ended at the Mahadeb Temple of Ganeshpatna village, where a party meeting was held later under the chairmanship of the MLA, Bari. In this Padayatra, senior BJD leader Sri Debendra Das, the Rasulpur Block chairman Sri Arun Rout, the Vice-chairman Mrs. Jayanti Dash, the Zilla Parishad member of Zone No 31 Sri Binod Majhi, the Zilla Parishad member of Zone No.21, Sri Ashok Samal, District BJD Co-ordinator Sri Benudhar Dash, Atalapur Sarpanch Mrs. Anesha Kasar, Routarapur Sarpanch Mrs. Swarnalata Sahoo, Routarapur Ps member Priyaranjan Sahoo, former Bramhabarada Sarpanch Mr. Bijay Jena and thousands of party workers of the nearest ten Panchayat of Rasulpur Block were actively taken part. The meeting was conducted by Sri Chaturvuja Dwivedi, the former Zillla Parisad member of Zone No.36. Addressing the Public meeting, Mrs. Das urged her co-workers to work unitedly for the interest of the party. “Honourable CM, Sri Naveen Patnaik is our ideal, we should work accordingly to make the party stronger, we shouldn’t have eyes at those, who talks what”, said Mrs. Das to her supporters. On the other hand, senior party workers, on the stage, hitted hard at the rebels those who tried to tarnish the party image as well as of the MLA’s. “These narrow minded people are staging threat to the party, when their vested interest is not being full filled. We will never let their conspiracy to become fruitful, also the image of our popular MLA be influenced by it either”, said one senior party worker.
However, the political analysts have talked this ‘Janasampark Padayatra’ as a jibe at the antagonists. This is a mere show of strength of the MLA, Bari is spoken out publicly. In addition, a huge of number crowds including women and elders were cheering up their local MLA in this public March. In this political meeting, many influential persons of BJD like Youth BJD leader Sri Rama Chandra Sahoo, the active BJD member of Atalapur S.K Guddu, Prakash Chandra Sahoo, Aruna Sahoo, Jayprakash Dash, Pratap Sahu, retired teacher Sri Maguni Prusty and many senior party workers were taken part.