Adidas moves Kanye West from its deal over antisemitism controversy 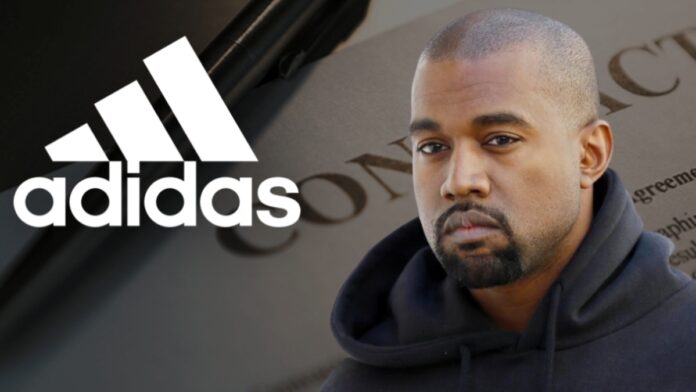 N.F Times, Pratap Prusty : In a controversial remark, the German Sports star giant, Adidas has cut ties with Ye, the musician and fashion designer formerly known as Kanye West, marking the end of a partnership that made the company billions.Finally, after weeks of silence and mounting public pressure, the German sportswear giant had to anounce it would “end production of Yeezy branded products and stop all payments to Ye and his companies,” effective immediately.
Adidas “does not tolerate antisemitism and any other sort of hate speech,” the company said in a statement, adding that “Ye’s recent comments and actions have been unacceptable, hateful and dangerous.”
The move comes weeks after Adidas announced it was conducting a review of its collaboration with Ye and his Yeezy brand, shortly after the artist sparked outrage for wearing a “WHITE LIVES MATTER” T-shirt at his Paris Fashion Week show. In the days that followed, he made antisemitic comments on Instagram and Twitter triggering suspensions and continued his diatribe on a podcast, where he doubled down on antisemitic tropes. In that same interview, he also falsely claimed that George Floyd, a Black man killed by Minneapolis police, had died from a fentanyl injection.
Leaked video earlier this month also captured him using antisemitic language during an interview with Fox News host Tucker Carlson, released by Motherboard. In it, he suggested his kids should learn about Hanukkah and not Kwanzaa because “at least it would come with some financial engineering.”
Ye’s commentary coincides with a broader rise in antisemitism across the country, experts say. Research from the Anti-Defamation League identified 7,343 antisemitic incidents in 2021, a 5 percent jump from the year prior, and 55 percent increase from 2019.Adidas’ decision to end its deal with Ye comes two days after hate groups appeared to use his celebrity to advance their agendas. On Saturday, an anti-Jewish group displayed a banner over a Los Angeles highway overpass that read, “Honk if you know Kanye is right about the Jews,” while offering Nazi salutes to oncoming traffic. A picture of the incident went viral.
Elsewhere in California, law enforcement officials scrambled to find individuals who distributed antisemitic leaflets that claimed covid-19 was a Jewish plot.In the midst of Ye’s scandal, former president Donald Trump posted on his Truth Social microblogging site that American Jews should be more grateful for the state of Israel, “before it is too late,” a comment widely seen as a threat to American Jewry and a repetition of generation-old antisemitic tropes of Jewish dual loyalty.
The backlash against Ye has been growing for weeks. Several companies, including French fashion house Balenciaga, talent agency CAA and Hollywood financier and producer MRC have all ended relationships with the performer.
Numerous celebrities and other public figures have also condemned the performer’s comments and called out Adidas for continuing to do business with him. “@ADIDAS DROP KANYE WEST,” actor and director America Ferrera posted on Instagram, “this is despicable. do not amplify that man’s influence.”
On Monday, Kim Kardashian, Ye’s ex-wife, tweeted: “Hate speech is never OK or excusable. I stand together with the Jewish community and call on the terrible violence and hateful rhetoric towards them to come to an immediate end.”Ye has had a significant impact on Adidas, with Yeezy generating an estimated $2 billion a year, close to 10 percent of the company’s annual revenue, Morningstar analyst David Swartz said.
The company said in its statement that terminating the relationship was “expected to have a short-term negative impact of up to €250 million on the company’s net income in 2022 given the high seasonality of the fourth quarter.”
Ye, who has won 24 Grammy Awards and released numerous critically acclaimed platinum records, started working with Adidas in 2013. The partnership eventually made Ye a billionaire and provided Adidas with a new customer base.But Ye began airing his grievances with Adidas this summer, when he falsely accused the company of stealing his designs, calling out chief executive Kasper Rorsted by name in a tweet. He went after the company again in early October, releasing a 30-minute online video of a meeting with Adidas executives, whom he accused of doing “wrong by the company, by the business and by the partnership.” Ye also showed the executives a pornographic film.
In an appearance on the podcast Drink Champs, Ye launched into a 10-minute rant about Jewish people and called out Adidas’s delay in ending the partnership.Ye’s comments presented a particularly sensitive challenge for Adidas, given the company’s history. Its founder, Adolf Dassler, was a member of the Nazi Party and outfitted the Hitler Youth.Jewish groups pressed Adidas to end its partnership with Yeezy.