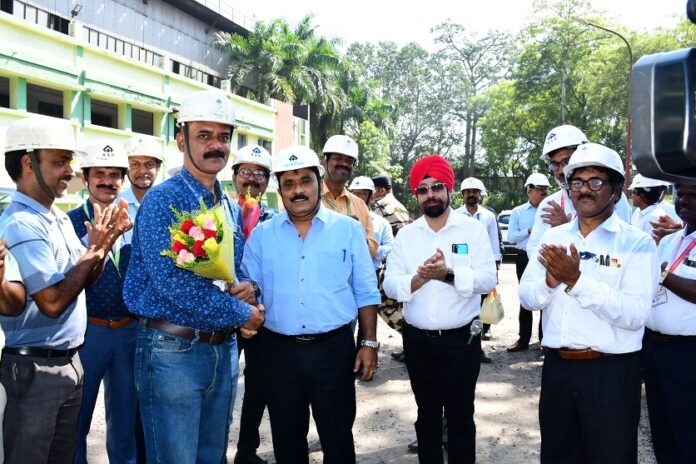 Rourkela : The Pipe Plant collective of SAIL, Rourkela Steel Plant has proved its potential and tenacity by achieving the All Time Best Daily Spiral Weld Pipe production of 377 Tons on 22nd October. The previous best of 342 tons was achieved on 30th January 2006.Mr. Atanu Bhowmick, Director In-Charge along with Mr. S R Suryawanshi, ED (Works), Mr. P K Satapathy, ED (P&A), Mr. P K Sahoo, ED (Projects), Mr. Somnath Tripathy, ED (MM) and Mr. A K Behuria, CGM In-charge (F&A) paid a visit to Spiral Weld Pipe Plant and congratulated the collective on achieving this feat after 16 years. He commended the efficiency and workmanship of the unit which helped in setting record even with lean workforce. Extending his best wishes Mr. Bhowmick reposed his faith on the team’s ability to create many more records and milestone in future. As a token of appreciation the Senior Officers handed over a bouquet and a packet of sweets to the Department.
Speaking on the occasion ED (Works) applauded the team effort in succeeding to create a new record. Emphasising upon the production, productivity, and uncompromising safety, Mr. Suryawanshi urged the collective to set newer targets and strive to achieve them.In his address Mr. P K Satapathy encouraged the team to win over all situations to meet and excel the targets by citing the mind game example of Virat Kohli in the recently concluded cricket match which helped India win.
Mr. P K Sahoo commended the wonderful team work of Pipe Plant collective, and contributions of other associated Departments, specifically the Hot Strip Mill – 2 in this success story and urged all to sustain the energy and the momentum.Mr. Tripathy assured the support of Materials Management Department in uninterrupted supply of spares and consumables for continuous production.
Mr. Behuria stressed upon the need of greater volume of production in all sections to tide over the crucial third quarter for keeping an upward trend of the bottomline.The dignitaries were received by Mr. Kartikeya Behera, CGM (CRM, SSM & PP). Mr. Guminder Singh, GM In-charge (Pipe Plant) thanked all for their presence and encouragement. Several Chief General Managers and Heads of Department of the Plant were also present on the occasion.
The smooth and systematic coordination between the Production Planning and Control, Research and Control Laboratory Hot Strip Mill – 2 Traffic and Raw Material and Central Marketing Organisation has led to the success.Notably the Spiral weld pipes are used in high pressure transportation of crude oil, natural gas and slurry transportation, water supply from river to cities, industries and within the cities, sewage disposal, grain silos Civil Engineering Pilings etc. 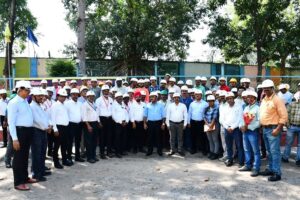 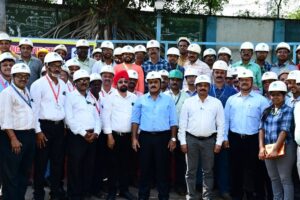