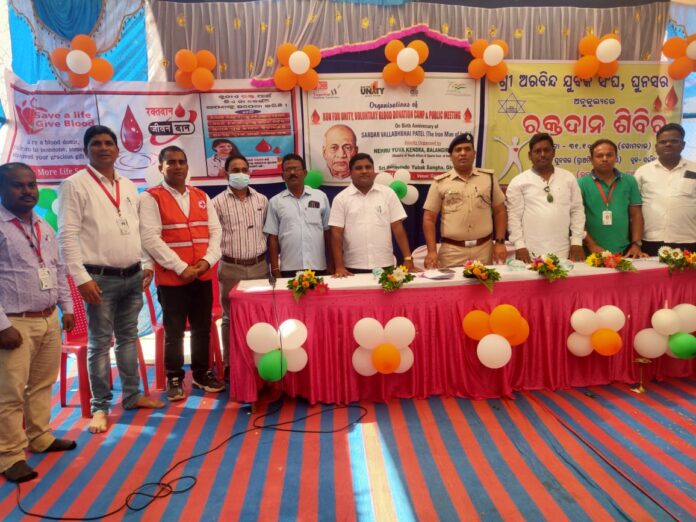 Balangir : To mark “Balangir Day” , a Blood Donation Camp was organized by sri Arabinda Yuvak Sangha, Ghunsar in the premises of Ghunsar Center Primary School of Saintala block of Balangir . The President of Sri Aurovinda Yuvak Sangha Sj.Premananda Bagh presided over the meeting and the programme was co-ordinated by the State Awardee Social Worker-Teacher and Red Cross Volunteer Sj. Ram Narayan Dash.The Block Development Officer (BDO ), Saintala Sj.Chandramani Nag attended as the chief Guest. The OIC,Police Station Saintala Sj. Abani Sahu, PS Memeber Sj. Champu Seth, Dr. Subanta Nag, Headmaster of the School Sj. Lingaraj Naik, Blood Donor and Social Worker Sj. Milan Kumar Barik attended the camp as the Honble Guest respectively. The participants took pledge as a Unity of the Country and pay homage to the Iron man, Sardar Ballabh Bahi Patel on his birthday. This Blood Donation camp was dedicated to mark the observance of Balangir Day in Balangir District. 50 units of blood were collected from the donors by the technicians Sj.Prasanta Sahu, Sj. Jitendra Kumar Panda, Jayaram of Blood Bank, Titlagarh. Before a week, Red Cross Volunteers and youths of the village had an awareness rally for motivating the youths to donate blood. The OIC Sj.Abani Sahu donated himself blood and motivated others to donate blood in this camp. The active workers of the Sangha Sj.Sunil Gahir, Tulasi Gahir, Debraj Padhan took the leadership and supported the camp. The Vice-president of the Sangha Sj. Rabi Chandra Naik passed vote of thanks. 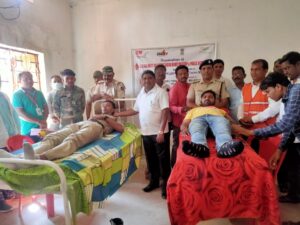