More than 250 Sports persons participate in the ‘Run for Unity’ organised by SAIL, Rourkela Steel Plant 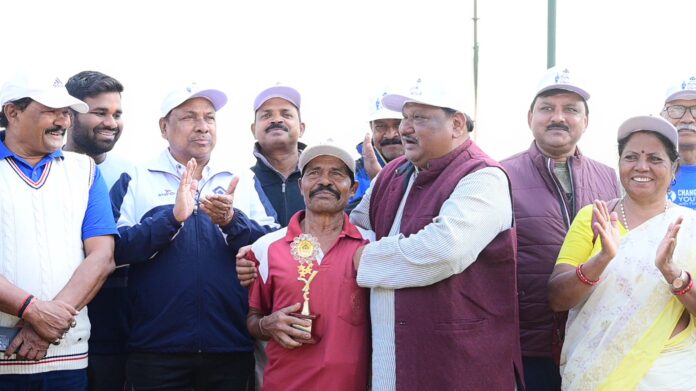 Rourkela : More than 250 Sports persons including Hockey Cadets and athletes of SAIL, Rourkela Steel Plant came together to participate in the ‘Run for Unity’ organised by SAIL, Rourkela Steel Plant (RSP). The Mini marathon was organised at Ispat Stadium on 31st morning to mark the Birth Anniversary of the First Deputy Prime Minister and Home Minister of the country that is being observed as Rashtriya Ekta Divas.
Mr. Jual Oram, the Hon’ble MP Sundargarh and Chairperson of the Parliamentary Committee on Defence, flagged off the Mini Marathon in the presence of Mr. P K Satapathy, ED (P&A),RSP. Mr. Jual Oram in his address deliberated about the contributions of Sardar Patel in uniting the country. The Rashtriya Ekta Diwas pledge was administered to all on this occasion.
The participants covered a distance of about 1000 meters inside the stadium. Eulogising the vision and the strength of character of Sardar Vallabhbhai Patel, Mr. Satapathy exhorted everyone to internalise his ideologies and the credo of ‘Unity in Diversity’. Mr. Ajay Kumar Nayak, CGM( TA & CSR), Mr. Debabrata Dutta, CGM In-Charge (HSMs), Mr. Pinaki Chowdhury, CGM (New Plate Mill), Mr. R.N.Rajendran, CGM(Mechanical), Dr. L.K. Biswal, CMO(M&HS), Mr. Kartikeya Behera, CGM (CRM,SSM&PP) and many other senior officers were present on the occasion. The Hon’ble MP Sundargarh and Chairperson of the Parliamentary Committee on Defence, along with ED (P&A) presented awards to the 3 best participants of the event.
At the outset, Mr. B K Rout, GM In-charge (P, H &SW) delivered the welcome address while Mr. R N Padhy, Assistant Manager (Sports) coordinated the programme. Mr. Anil Kumar Mallick of CRM Department anchored the show.
Pledge taking ceremonies were also organised in different departments and offices of RSP, in which senior officers along with employees took the National Unity Day pledge. Mr. Atanu Bhowmick, Director In-Charge, Mr. S R Suryawanshi, ED(Works), Mr. P.K.Satapathy, ED(P&A), Mr.P.K.Sahoo, ED(Projects), Mr A K Behuria, CGM Incharge (F&A), and other senior officers took part in the pledge taking ceremonies organised at their offices.
The pledge administered reads as : “I solemnly pledge that I dedicate myself to preserve the unity, integrity and security of the nation and also strive hard to spread this message among my fellow countrymen. I take this pledge in the spirit of unification of my country which was made possible by the vision and actions of Late Shri Sardar Vallabhbhai Patel. I also solemnly resolve to make my own contribution to ensure internal security of my country.”