25th Vedvyas Sangeet Nrutyotsav-2022 to begin from 1st November: Renowned artistes from different parts of the country set to perform in the 5-day festival 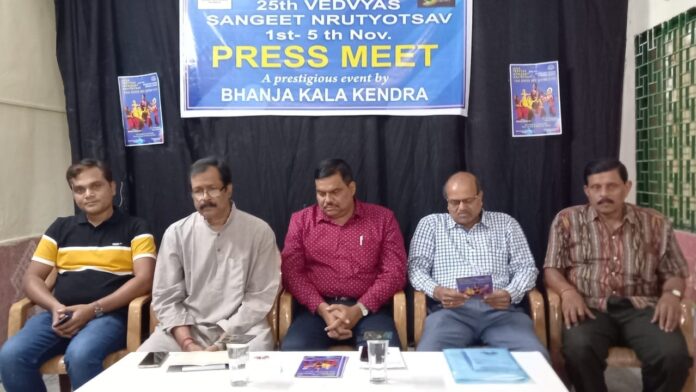 The 25th edition of the enthralling Vedvyas Sangeet Nrutyotsav, the prestigious 5-Day Mega National Festival of Classical Dance, Classical Vocal, Folk Dance, Folk Music & Tribal Dance and Music, organized under the aegis of Bhanja Kala Kendra, will begin from 1st November at the Open Air Auditorium of Bhanja Bhavan in the Steel City Rourkela. It is worth mentioning here that the festival has carved a niche for itself in the cultural firmament of the country with its sheer magnificence. Every year, for five days, the huge Bhanja Bhavan open air auditorium echos with the beats of Phakawaj, the euphony of flute and the rhythmic sounds of ghungroos that transcends everyone into a cultural wonderland.
The festival that features in the cultural calendar of the state bears more significance this year as it marks the Silver Jubilee also coinciding with the Azadi Ka Amrit Mahotsav being celebrated across the nation to commemorate 75 glorious years of Indian Independence.
More than 300 artists from different parts of India will congregate in the steel city to present their performance in the festival. These include many renowned exponents of performing arts of the country. Central Sangeet Natak Academy Award recipients Sangeeta Das and her troupe from Puduchery will present Odissi Dance in the 4th evening while another Central Sangeet Natak Academy award winner Prerana Deshpande and her troupe from Pune will present their performance in the concluding evening. Dr. Vasantha Kiran and his troupe from Bengaluru will present Kuchipudi Dance in the 4th evening. Popular folk dance forms like Lavni from Maharastra, Chau from Mayurbhanj, Ganjam Jodi Sankha & Ranappa, Bihar folk dance and Purulia Folk Dance will also be the major attraction in the festival this year.
The Festival will be inaugurated by Mr. Aswini Kumar Patra, Hon’ble Minister Odia Language, Literature, Culture, Excise & Tourism on 1st November 2022. Mr. Jual Oram, Hon’ble MP & Chairman, Parliamentary Standing Committee on Defence, Padmashri Dillip Tirkey, Hon’ble MP & President, Hockey India, Mr. Subrat Tarai, Hon’ble MLA, Raghunathpalli, Mr. Sarada Prasad Nayak, Hon’ble MLA, Rourkela, Mr. Atanu Bhowmick, DIC, RSP, Dr. Subhankar Mohapatra, ADM, Rourkela, Mr. Kaushal Kishore, GM & BUH, NSPCL, Mr. S R Suryawanshi, ED (Works), SAIL, RSP, Dr. Rama Hari Das, Mr. Ajay Kumar Naik, Regional Manager, SBI and Mr. Nikunja Kumar Swain, Business Head, Gaja Engineering, Hyderabad will grace different evenings of the festival as Esteemed Guests.
It is noteworthy that Vedvyas Sangeet Nrutyotsav was started in the year 1998 with an aim to promote and preserve Indian Classical Dance and Music. The Festival which is held from 1st to 5th November every year at the huge Open Air Auditorium, has so far been successful in ushering in a Cultural Renaissance in the region. Each day of the 5-Day Festival exhibits the best of the rich and diverse cultural heritage of the country. Different Classical Dance forms presented with dexterity and precision by eminent exponents mesmerise art connoisseurs at the festival. The City transforms into a Cultural Wonderland with the congregation of renowned artists from different parts of the country. The Bhanja Bhavan Open Air Auditorium is witness to many riveting dance and music performances from stalwarts of Indian Classical Dance & Music like Padma Bibhushan Guru Kelu Charan Mahapatra, Padmashri Sanjukta Panigrahi, Padma Bhushan Saroja Baidyanathan, Padmashri Aruna Mohanty, Padmashri Mukund Naik and many other acclaimed exponents. The festival not only promotes Tourism, Art, Music, Dance & Culture, but also inspires many budding talents to live their dreams. Another uniqueness of the festival is that both Classical and folk dances are performed on the same stage and one evening of the festival is exclusively dedicated to classical music.
The Vedvyas Sangeet Nrutotsav has established its own identity and features in the Culture & Tourism Calendar of Odisha. This unique five-day carnival in which the leading exponents of almost all Classical & Folk Dances take part has few parallels in the region.
The Scintillating and graceful Classical dance recitals along with an array of foot tapping folk and tribal dances as well as mellifluous classical vocal renditions by eminent singers will certainly make the Vedvyas Sangeet Nrutyotsav-2022 a truly memorable one for the culture loving milieu.