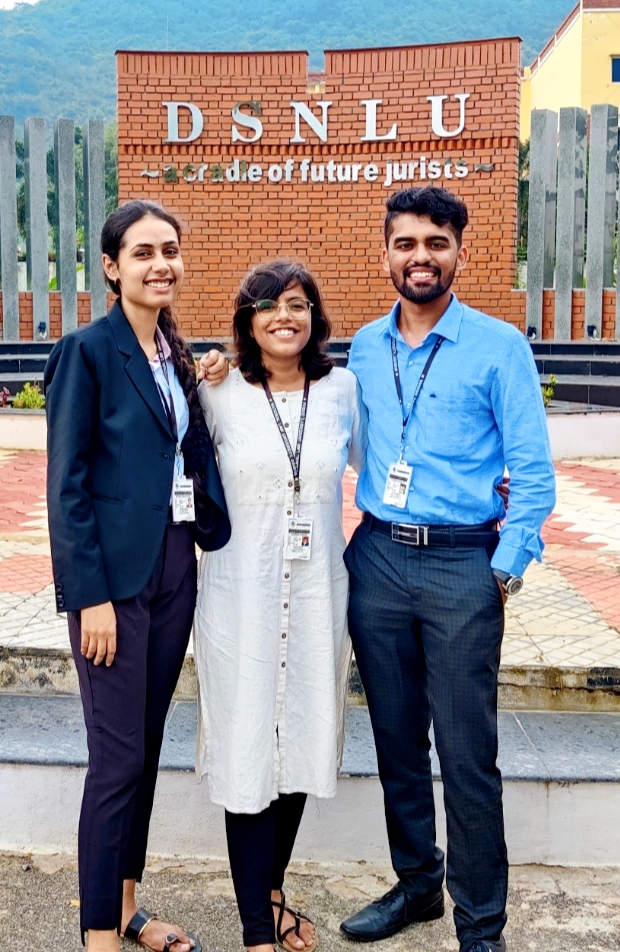 Buruea Head (PKB) : In an extraordinary and outstanding performance in a National Level Competition ” Crime Scene Investigation 4.0 ( Inter- University) held at Damodaram Sanjivayya National Law University, three students belonging to Law University Odisha named Anwesh Khemundu, Aryama Singh Rajput and Samridhi Prakash were adjudicated as Winner. The competition was organised by the Legal Incubation Center at Visakhapatnam on 24th September 2022. It was reported that there were more than hundred teams across the country participated in the event in which the team comprising of three students of Law University Odisha exhibited their excellence following which they won the caps. Owing to this appreciable recognition being pocketed by the team, the Law University Odisha felt elated in showering wishes and greetings upon the team. In addition to this, congratulatory messages uttered from different stakeholders and staff members of the university. This has purchased a gigantic fame and glory not only for the university they belong to but also to a vast galaxy of law students across the state.
It is said , ” As is the father, So is the son” Yes, we are talking about Anwesh who has had a battery of achievements to his credit like his father. Mr. Anwesh has a passionate interest and indomitable spirit of ambition in NCPCR and OHRC . He earnestly intends to fight against the prevalence of injustice in our surroundings and of course, across the state. He has shown excellent performance in sports and games. Mr.Anwesh has been strongly motivated by his father who is currently serving as Subcollector, Malkangiri District . His Grandfather Sri. Jaya Chandra Khemundu, a scholarly teacher of wide ranging reputation in undivided Koraput District and Chairman of Deomali Public School, Semiliguda , played a dynamic role in shaping up of Anwesh. Anwesh is the eldest son of Smt.Tapaswini Khemundu and Sri.Akhaya Kumar Khemundu. Hailing from a tribal dominated Koraput District, Anewesh is considered as a radiant Star in the academic horizon of the state.
When the news about their achievement spread, everyone post to pillars not only congratulated the team but wished them enormous amount of success and accolades for the establishment of their future careers. All the teachers of Malkangiri and Koraput District wished Mr.Anwesh a fortified career ahead with all illumination.