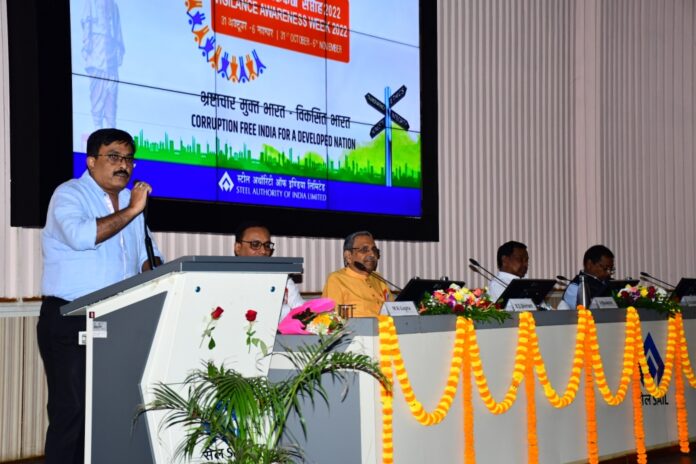 Rourkela : The observance of Vigilance Awareness Week-2022 at Rourkela Steel Plant (RSP), which commenced had on 31st October, concluded on 5th November in a function held at Gopabandhu Auditorium of HRD Centre.
A series of programmes were organized as a part of the observance of Vigilance Awareness Week-2022 at RSP. In the concluding function, Mr. Atanu Bhwomick, Director In-Charge, RSP was the Chief Guest and Mr. B.D.Shivahare, Sr. Faculty, The Art of Living was the Guest Speaker. Mr. P K Satapathy, ED (P&A), Mr. P K Sahoo, ED (Projects) and Mr. M K Gupta, GM (Vigilance) & ACVO, were also present on the dais. Several senior officers of the Plant, employees and students were also present on the occasion.
Speaking further Mr Atanu Bhowmick said, “Being in the public sector we all are accountable in different ways and our actions come under scrutiny of a number of agencies. We need to be fair and equitable in all our dealings.” Emphasizing on the fact that collective effort is essentialto root out corruption, Mr. Bhowmick said, “We should also be conversant with the rules, procedures, systems that are available to us for taking decisions”. He praised the Vigilance department of RSP for organizing various programmes for creating awareness amongst employees and students in this regard. 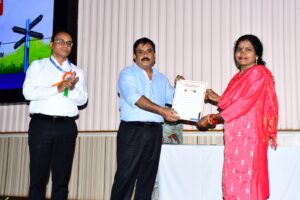 Speaking on the occasion Mr. Shivahare said that, corruption happens in the absence of belongingness. He exhorted the employees to inculcate strong moral values in children and urged all to stand up against unrighteousness to keep up the age old Indian culture of belongingness which produced great men and heroes like Sardar Vallabh Bhai Patel.
Mr. Satapathy in his address stressed upon the need of imbibing right values in the young minds, so that they will be energized to fight against corruption. Speaking on the occasion, Mr. Sahoo said that any change for the good must begin with the individual. He also highlighted the importance of adhering to the rules and procedures.
The dignitaries awarded the prize winners of the various competitions held during the observance of Vigilance Awareness Week, as well as the judges. Mr. Gupta welcomed the gathering and Mr. Soumit Kumar, GM (Vigilance) proposed a formal Vote of Thanks. Ms. Ankita Bilung, Manager, R&C Lab was the compeer. 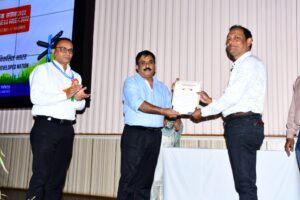