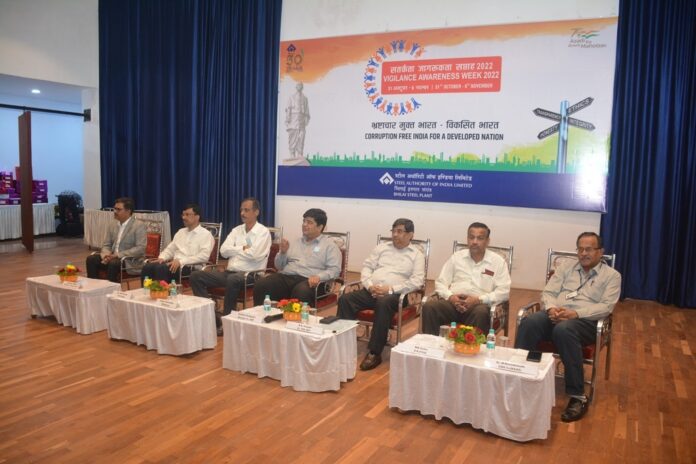 Bhilai : During the week long observance of Vigilance Awareness Week, various competitions viz. Essay, Slogan, Quiz, Extempore, Debate, Speech and Drawing & Painting were organised by Vigilance Department for the employees of Bhilai Steel Plant, their family members and students of Schools and Colleges in vicinity of Bhilai to sensitise them towards the ill effects of corruption and importance of Integrity, transparency and accountability in personal and public life.
To honour and felicitate the winners and judges of these various competitions as well as participants of various programmes, Vigilance Department organised a Prize Distribution Ceremony on 05.11.2022 at Kala Mandir, Bhilai.Shri Anirban Dasgupta, Director I/c Bhilai Steel Plant was the Chief Guests and Shri G S Prasad, Ex CEO (Rourkela Steel Plant) was the Guest of honour of the function. Other dignitaries present on the occasion were Sh. M M Gadre, ED (P&A), Sh. Tapan Sutradhar, ED(Mines), Dr. A K Panda, ED(F&A), Dr. M. Ravindranath, CMO I/c and Sh. A. C. Rathi, Ex ACVO (BSP). Chief General Managers, General Managers, other Seniors officials of Bhilai Steel Plant, Prize winners including School and College students, participants of various programmes viz. Welcome Song, Short Film on PIDPI/Vigilance were also present during the Ceremony.
Ceremony was started with Welcome Song by School Students of BSP Schools, welcoming the guests by flower bouquets. The same was followed by garlanding the portrait of Shri Sardar Vallabh Bhai Patel and lighting the lamp by dignitaries present on the dias.
Welcome address was delivered by Shri Sandeep Gupta, GM (Vigilance) and Actg. ACVO (BSP).After the welcome address, 1st prize winners of debate competition illustrated their debate before the gathering. After that, prizes were distributed to all the winners, judges and participants by the dignitaries.
In continuation of the Ceremony, Sh. G S Prasad, Ex. CEO (RSP) addressed the gathering with his inspirational notes. In his address, he emphasized on the importance of Integrity, Transparency and accountability for the sustainability and growth of the Organisation. He stated that by eradicating corruption, we can bring Ram Rajya in the Nation, which is a symbol of ideal society without any crime, corruption & endowed with all the auspicious qualities, the state of peace, prosperity, justice & equality to common man and complete well-being of the subjects of the state in all aspects etc. in other words we can say the Model of a Developed Country. He also stated that we can once again make our Country the Golden bird by adopting the culture of Integrity and honesty.
Chief guest, Shri Anirban Dasgupta , Director I/c also enlightening the gathering with his motivational words. In his speech, Sh. Dasgupta expressed his concern about corrupt practices in higher level, he also shows his worries about the unequal distribution of wealth, which is being increased day by day amongst the citizens due to the corruption. He stated that due to corruption, rich people becoming richer and poor people becoming poorer. He stated that some time poverty increases the dissatisfaction and depression amongst the poor people, due to lack of money and other domestic needs and comfort, they become apathetic towards the social issues and sometime become unethical in their behaviour. Hence, it is essential to opt zero tolerance policy towards the corruption, so that the inequality in society can be reduced and our country can be made truly a developed Nation. For this contribution of everyone is required.The Ceremony was concluded with display of CVC’s video Message against the corruption and display of Short Film on importance of Vigilance & PIDPI Resolution, made all with in-house resources by BSP employees. 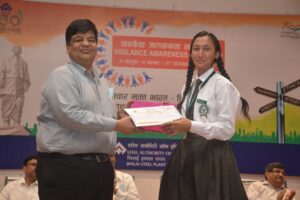 Vote of thanks was given by Sh. Aniket S. Ojha , DGM (Vigilance) and anchoring was done by Md Naushad Alam, AGM(Vigilance).Ceremony was concluded successfully with the contribution of whole Team of Vigilance Department, Bhilai Steel Plant. 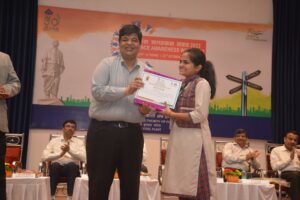