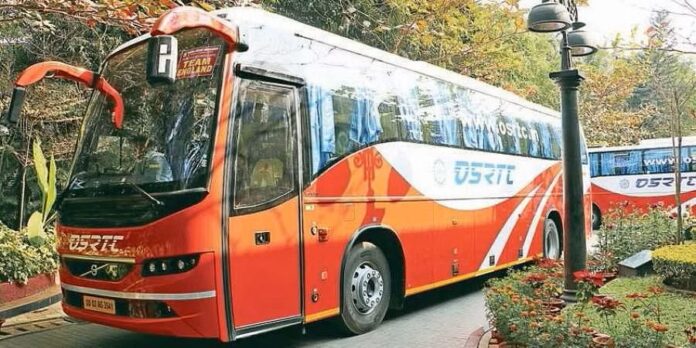 BHUBANESWAR: In a significant move, Odisha and Bihar governments have renewed the agreement to operate direct bus services passing through Jharkhand covering almost 21,867 km in three states.Transport department sources said the inter-state bus services will be available on 33 routes. Earlier, buses were operating on 15 routes covering a total distance of 9,276 km.
Services on the new and longer routes will boost connectivity of religious, tourists and places of educational importance between the states. People in the bordering states had been demanding bus services in more routes for better communication.As per the new agreement, Odisha buses will cover 17,611 km in Bihar while Bihar buses will cover 8,784 km in Odisha. The buses will ply via Jharkhand covering a distance of 8,032 km in the neighbouring state.
With the renewed agreement in place, people commuting to Patna, Bihar Sharif, Deoghar, Gaya, Aurangabad, Darbhanga, Rajgir, Bhagalpur, Buxer, Siwan, Aara, Hajipur, Chapara and Nawada from different parts of Odisha including Puri, Bhubaneswar, Cuttack, Baripada, Balasore, Rourkela, Sambalpur and Sundargarh will be benefited.Since the buses will ply on 33 routes, more than 100 permits and trips will be opened in both states. The agreement with Bihar is expected to open the door for more inter-state services with other states and more bus permits.
Secretary of State Transport Authority (STA) Brajabandhu Bhol said it is a major achievement of the Transport department to convince its Bihar counterpart to add more routes and facilitate road transport in the state.“The agreement between Bihar and Odisha would also help in strengthening the cultural roots. Talks for similar agreements with West Bengal, Chhattisgarh, Andhra Pradesh and Telangana are in advanced stage,” he added.
In August, Minister for Commerce and Transport Tukuni Sahu asked Transport department officials to take steps to implement all pending proposals mooted earlier for the introduction of luxury coach buses to different parts of the state and neighbouring states.The managing director of OSRTC was asked to pursue with his counterparts for the early settlement of issues and signing of reciprocal agreements for inter-state bus services.