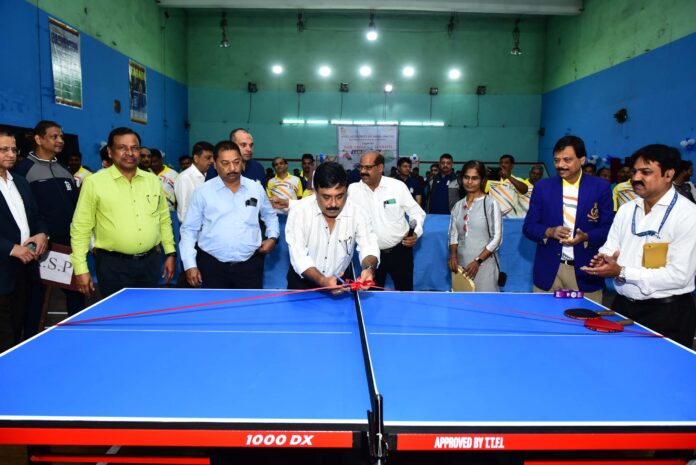 Rourkela : SAIL Swarna Jayanti Table Tennis Championship was inaugurated at Indoor Stadium, Sector – 20, of SAIL, Rourkela Steel Plant on 11th November 2022. Mr. Atanu Bhowmick, DIC (RSP) was the Chief Guest of the inaugural function and declared the tournament open. Later he played few shots to mark the opening on the game. Present on the occasion were Mr. P K Satapathy, ED (P&A), Mr. P K Sahoo, ED (Projects), Mr. Somnath Tripathy, ED (MM), Dr. B K Hota, ED (M&HS), Mr. Naresh Kumar, CGM In-charge (Services), Mr. S K Nayak, CGM (F&A), Mr. Saurav Shukla, DGM (Sports- Corporate Office). In all 10 teams from across SAIL fraternity attended the inaugural function along with other Senior Officials of RSP.
Speaking on the occasion the DIC expressed his sense of pride in hosting the event as a part of SAIL Swarna Jayanti celebration and highlighted the importance of sports which is not just entertaining but brings positivity and strengthens coping mechanism. Extending his best wishes to all the players the DIC urged all to give in their best and use the opportunity to further enhance their skills and acumen irrespective of winning and losing.
The dignitaries were introduced to the different teams. The first match was played between BSL, Bokaro and SAIL, Corporate Office team. The other teams in the fray are ISP, RSP, ASP, BSP, DSP, SSP, CMO and Chandrapura.
At the outset Mr. B K Raut, GM (PH, SW & Sports) welcomed the gathering while Ms. Sangeeta M Sindur, Manager (Personnel) anchored the programme.SAIL Swarna Jayanti Table Tennis Championship as the name suggests is a part of commemoration of 50 years of integration of SAIL. Various events are being organised all over the SAIL Units. The championship is slated to conclude on 13th November.