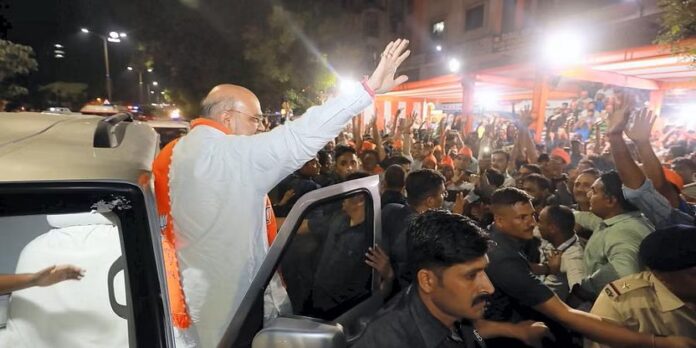 AHMEDABAD: It is said that the road to power in Gujarat passes through Saurashtra, that’s why BJP is working the hardest in Saurashtra to maintain its power and increase its victory tally.
The battle for Saurashtra is however getting tougher, Morbi’s Bridge collapse on October 30 has disturbed BJP’s equation in Saurashtra.
The first phase of the Gujarat assembly elections will be held in 48 seats of the Saurashtra zone of Gujarat on 1st December. Saurashtra considered the centre of power in Gujarat politics, is witnessing vigorous campaigning for the past two months by three political parties.
A huge cooperative meeting was held in Amreli district in the presence of Union Home Minister Amit Shah, in Rajkot and Morbi BJP National President JP Nadda held a roadshow during the Gauravyatra.
Prime Minister Modi also held meetings in Saurashtra, including those in Junagadh and Jam Kandorana, before implementing the Election Code of Conduct. Apart from this, the Prime Minister has also launched several developments works in Jamnagar.
BJP State President C.R. Patil and Chief Minister Bhupendra Patel have also held several public programs to preserve Saurashtra in the last six months. It is finding difficult for Congress to save the stronghold of Saurashtra this time as there is no impact and Congress has no such big face after Vithalraddia’s departure, recently Congress MLA from Visavadar and Congress face of Saurashtra Harshad Ribadia joined BJP.
Meanwhile, Kejriwal announced national joint general secretary Isudan Gadhvi as AAP’s chief ministerial candidate who belongs to the Saurashtra region. Kejriwal has also tried to register his presence here in the last six months by holding road shows, town hall meetings, gatherings of intellectuals, and the Business community.
The Saurashtra results from 2002 to 2012 show a steady increase in the BJP’s Saurashtra seat, with Patidars showing a pro-BJP stance. But in 2017, BJP suffered a massive loss in Saurashtra due to the Patidar reservation movement. In three districts of Saurashtra, namely Amreli, Morbi, and Girsomanath, BJP lost all the seats, while in Junagadh, and Porbandar districts, BJP got one seat each.