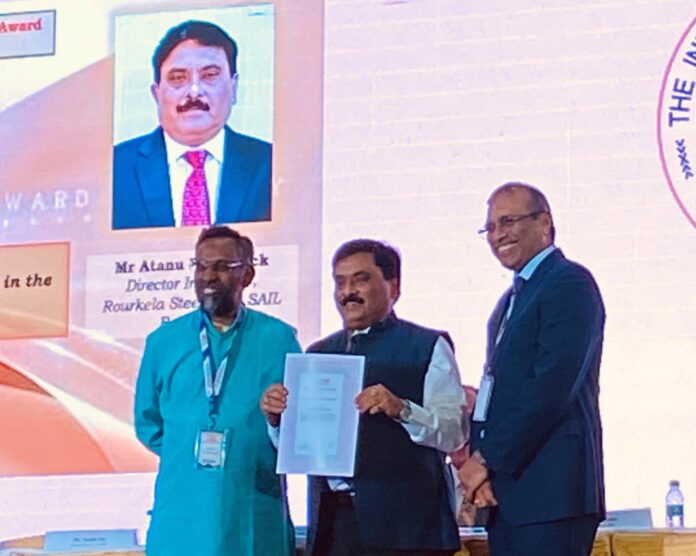 Rourkela : Mr. Atanu Bhowmick, Director In-Charge, SAIL Rourkela Steel Plant (RSP) received the prestigious IIM-TSL New Millennium Award from The Indian Institute of Metals in recognition of his original contributions in the area of Blast Furnace based iron making. He received the award in a glittering function organised on 14th November, 2022 at Ramoji Film City Hyderabad.
Mr. Faggan Singh Kulaste, Honb’le Union Minister of State for Steel and Rural Development was the Chief Guest of the function while Professor B J Rao, Vice Chancellor, University of Hyderabad, Dr. G Madhusudan Reddy, Chairman, IIM, Hyderabad & Director, DMRL and Mr. Samir V Kamat, President, IIM & Chairman, DRDO were the Guests of honour. It is worth mentioning here that, the coveted award recognises original contributions in the area of Blast Furnace based iron making including process improvements, raw materials selection, preparation, agglomeration, and improvement in operating practices, alternative iron making processes.
Notably, with about 29 years of experience in working in the Blast Furnaces Department of Rourkela Steel Plant, Mr. Bhowmick, is considered as one of the stalwarts of the country in Blast Furnace technology. With his in-depth insight in the process of hot metal making, he has made tremendous contribution not only in enhancing the production from the Blast Furnaces of RSP but also in improving techno-economics, operation and maintenance practices as well as erection of new Blast Furnace and upgradation of the existing ones.