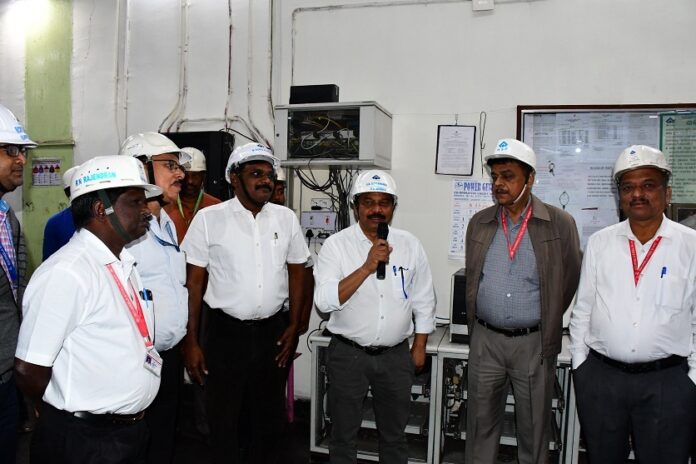 Rourkela : The Captive Power Plant -3 (CPP-3) of SAIL, Rourkela Steel Plant (RSP) has set fresh records in average single-day power generation since inception. The Unit has produced 51.02 Mega Watts (MW) of Electrical Power on 16th November, 2022, thereby surpassing its previous record of 50.37 MW clocked on 29th March, 2022.
It is worth mentioning here that the Captive Power Plant -3 consists of Steam Turbine Generators in Power Blowing Station, Top Recovery Turbine Generator and Back Pressure Turbine Generator.
Mr. S R Suryawanshi, ED (Works), visited the Captive Power Plant -3 on 17th November to congratulate the collective for the remarkable performance. He applauded the team and encouraged the employees to achieve higher levels of power generation. Speaking on the occasion, Mr. Suryawanshi said, “We’ve tremendous potential to continue the good run and surpass important milestones with greater efficiency. Let’s give our best to help RSP become the best Steel Plant in the country.”
It is worth mentioning here that dedicated team of CPP-1 led by Mr. B Sunil Kartha, CGM (Power) and Mr.S.L.Das, GM and in-charge (CPP#3) has been making unrelenting efforts to enhance the performance of the Unit. The Unit registered best monthly performances, number of times, in 2022 since the inception of CPP#3 in 2013-14.
These outstanding achievements were possible through first time major overhauling of all three Turbo-blowers of Power and Blowing station leading to savings of 12 Tonne steam per hour per turbo-blower which was efficiently utilized for enhanced power generation in Steam Turbine generators. Besides, replacement of 20MVA TRTG Generator Transformer with 25MVA transformer, rectification and precision adjustment of control valve spindle of Steam Turbine Generator#2,ensuring quality parameters of hydraulic oil used in turbines, re-commissioning of sulphuric acid dosing system at cooling towers of PBS for control of clarified cooling water chemistry of turbo-blowers and steam turbine generators resulting in enhanced efficiency and reduced maintenance requirements helped in achieving the enhanced performance. A series of incremental system improvements like enhancing the reliability of CDCP boilers, arresting steam leakages; optimizing the boiler loadings and thereby their efficiencies; enhancing the vacuum in condensers in STGs and in turbo-blowers; enhancing the reliability of major power plant equipment and related auxiliaries; rationalization, optimization and balancing of steam generation in boilers and their effective utilization in turbine generators and turbo-blowers were some of the other major initiatives undertaken by the unit.