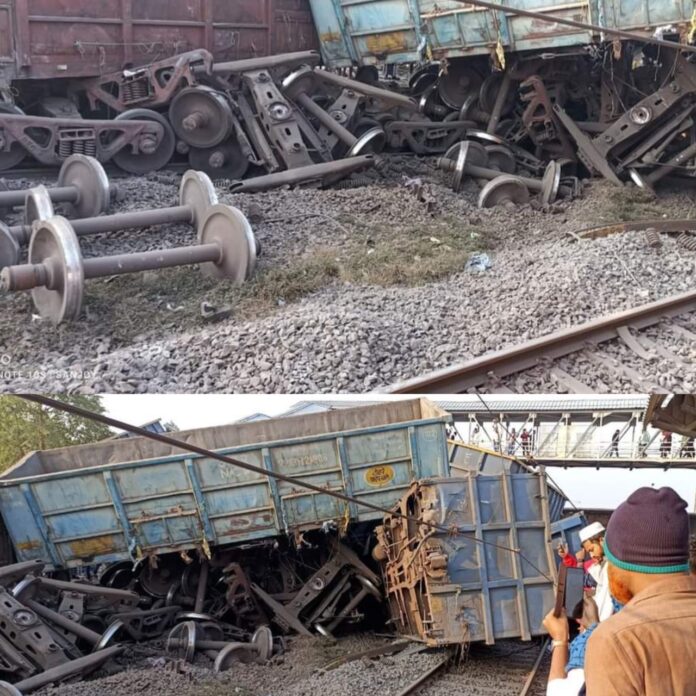 Korei, Jajpur, Pratap Prusty : In a horrific train accident at Korei Railway Station, three people were killed on Monday morning. The mishap took place, when a goods train rammed over the platform and the foot over bridge. The accident was so grevious that 8 wagons of the goods train crashed and rolled over the platform where people were waiting to catch the passenger train coming from Bhadrak. In this accident three people including two women in a family of Korei namely Parbati Bindhani (mother) and Kandhei Bindhani were driven under the wreckage and died. Fortunately, the child of two month of Kandhei Bindhani was closely saved and as per the information received, no other casualties were reported excluding the above. In this response, Railway Minister Shri Ashwini Vaishnab has conveyed his condolences and announced ex-gratia Rs. 5 Lakhs to the kin of the deceased, 1 Lakh to the family of sustaining serious injury and 25 thousand to the family of minor injury. Following this mishap, all over total 8 trains have been cancelled that run between Howrah and Bhubaneswar, and several trains of this route have been diverted. In this connection, Chief Minister Naveen Patnaik has announced ex-gratia to the family of the deceased. As per the latest report, the evacuation work of the wagons are going on. The exact reason of the mishap is yet to be ascertained. In this connection, the Ministry of Railway has ordered a high level enquiry.