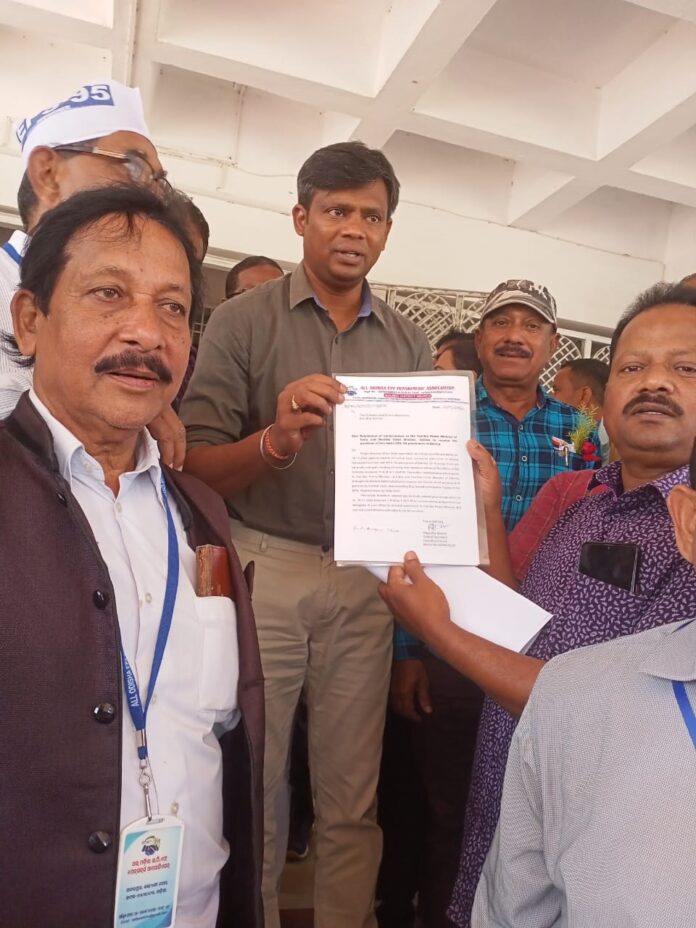 Khordha : Members of All Odisha EPF Pensioners Associations Demanding their Minimum Monthly Pension Amount to be Increases from Rs-1000 to Rs-9000 for Month with D.A. at the Existing Rate. Hike in Pension in the light of the Directives of Supreme Court Inclusion of all the EPF Pensioners under the Biju Swastya Kalyan Yojana and Provision of Free healthcare, Medical Treatment to them. The Association along with the Members of different Organization’s Organized a Silent Token Protets infront the Office of Collector Khordha to Press their Demands and the Agitators Submitted a Memorandum address to CM, Odisha through Collector Khordha. Hundreds of EPF Pensioners joined the Token Protests. It is a quite Unfortunate that the EPF Pensioners though Contributed Significantly to the nation building at par with other Stakeholders, but they are Treated Differently. This is Evident from the fact that Employees those who get Retired under both State and Central Government are getting their Minimum Monthly Pension of Rs.9000/- along with DA to Compensate the price rise and Consequent inflation with effect from 2016.Where as EPF Pensioners were Retired from Semi Government and Private Organization are Deprived of the same Privileges Violating the Principles of Natural Justice. On the Other hand the SC in its Verdict delivered in Oct. 2016 had clearly issued Directives to Pay Pension to all the EPF Pensioners based on their last pay. Based on this Directive Several State Government including the Government of Kerala though have already Implemented the Order but the Odisha Government is yet to Implement the same for the EPF Pensioners which is Deplorable, the association alleged. In this Silent Protests All Odisha EPF Pensioners Association State President Er. Bijaya kumar Jena, Odisha State Corporation Employees Association Secretary Saroj Kant Mallick, Vice-President Sachita Nanda Samantaray, Harekrushna Behera, Geetanjali Pati among others were Participated.

Share
Facebook
Twitter
Pinterest
WhatsApp
Previous article3 killed in a horrific train accident at Korei Railway Station : Jajpur
Next articleChildren from various schools of Odisha appealed for their ‘Right to Breathe’ through an open letter addressing it to Chief Minister