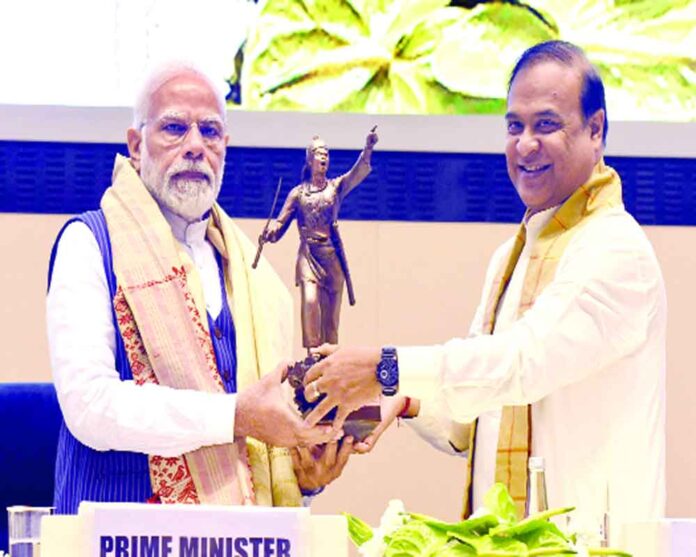 India is correcting its past mistakes by celebrating its varied heritage and remembering its unsung bravehearts who were lost in the pages of history that was written as part of a conspiracy during the colonial era, Prime Minister Narendra Modi said on Friday.Addressing the closing ceremony of the year-long 400th birth anniversary celebrations of Lachit Barphukan and releasing a book on him “Lachit — Assam’s Hero who Halted the Mughals”, the Prime Minister said the history of India was not just about slavery but also about its warriors.
Stating that Assamese warrior and General Lachit Barphukan had kept national interest above blood relations and did not hesitate to punish his close relative, Modi said “his life taught us that instead of nepotism and dynasty, the country should be supreme”.“India’s history is the history of warriors, the history of victory, the history of sacrifice, selflessness and bravery,” Modi said.
Barphukan (November 24, 1622-April 25, 1672) was the famous General of the Royal Army of the Ahom Kingdom of Assam, who defeated the Mughals and successfully halted their ever expanding ambitions under Aurangzeb.The PM said unfortunately even after Independence, the history that was written as part of a conspiracy during the colonial era continued to be taught. “After Independence there was a need to change the agenda of slavery but it did not happen,” Modi said.
He said in every corner of the country, brave sons and daughters fought oppressors but this history was intentionally suppressed.“Today, India has broken the shackles of colonialism and is moving forward, celebrating our heritage and remembering our heroes with pride,” he said.“Lachit’s life inspires us to rise above dynasty and think about the country. He had said that no relationship is bigger than the country,” he said.
Terming Veer Lachit’s exploits a glorious chapter of the history of Assam, the Prime Minister said, “I salute this great tradition on the occasion of the festival of India’s eternal culture, eternal valour and eternal existence.”The Prime Minister reiterated India’s mood to get rid of the mentality of slavery and take pride in its heritage. India is not only celebrating its cultural diversity but also acknowledging the unsung heroes and heroines of its history. “Immortal sons of Maa Bharati like Lachit are the inspiration of fulfilling the resolutions of the Amrit Kaal. They make us familiar with the identity and glory of our history and also spur us to dedicate ourselves to the nation”, the Prime Minister added.
Bravehearts like Lachit showed that forces of fanaticism and terror perish but the immortal light of Indian life remains eternal, the Prime Minister emphasised.The Prime Minister complimented the Assam Government for taking steps to celebrate the legacy of its heroes. He mentioned the projects like a museum and a memorial in Assam to honour its heroes. He said such steps will help the younger generation to know the history of sacrifice and bravery.
The Prime Minister said, “Lachit’s life inspires us to live the mantra of ‘Nation First.’ His life inspires us to rise above self and to give the highest priority to the national interest.“His life teaches us that instead of nepotism and dynasty, the country should be supreme.”