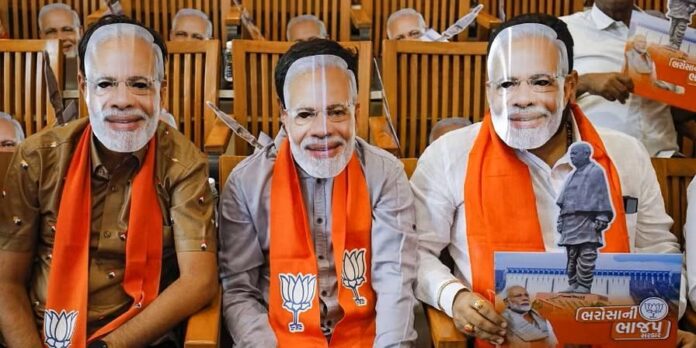 AHMEDABAD: On Saturday, BJP National President JP Nadda released Bharatiya Janata Party (BJP)‘s ‘Sankalp Patra’ or manifesto at “Shri Kamlam” office in Gandhinagar for Upcoming Gujarat assembly polls. CM Bhupendra and Gujarat State BJP President were also present.For the first time, BJP in its Manifesto has promised to establish an Anti-Radicalisation Cell, “We will create an Anti-Radicalisation Cell to identify and eliminate potential threats, and sleeper cells of the terrorist organizations and anti-India forces,” said JP Nadda.
BJP National President also announced that they will bring the Recovery of Damages of Public and Private Properties Act, “We will enact the Gujarat Recovery of Damages of Public and Private Properties Act to recover damages done to public and private properties by anti-social elements during riots, violent protests, unrest, etc,” said Nadda.
He also said “We will ensure the complete implementation of the Gujarat Uniform Civil Code Committee’s recommendation.In line with BJP’s goal to achieve, a five trillion economy target, BJP also promised to make Gujarat a one trillion economy center. “We will make Gujarat a $1 trillion economy by maintaining its pole position in manufacturing, focusing on services, and investing in human and institutional capacity-building for new-age industries. We will attract ₹5 lakh crore foreign investment and make Gujarat the Defence and Aviation Manufacturing Hub of India.”
To attract first-time voters and youth BJP promised employment to about 20 lakh people in the upcoming years, “We will provide 20 lakh employment opportunities to the youth of Gujarat in the next 5 years.”Various welfare schemes have been promised for tribals including mobile delivery of ration across 56 Tribal sub plan talukas and allocation of ₹1 lakh crore under the Vanbandhu Kalyan Yojana 2.0 for the overall socio-economic development of tribals.
It’s also mentioned in the Sankalp Patra that they would construct a Birsa Munda Adi Jati Samriddhi Corridor between Ambaji and Umergram to spur growth by connecting every tribal district’s headquarters with a 4-6 lane state highway, and by constructing a tribal cultural circuit to connect Pal Dadhvaav and the Statue of Unity to Shabari Dham.
Regarding health and job facilities in tribal areas, BJP has promised to ensure state-of-the-art healthcare facilities in tribal areas by setting up 8 medical colleges, and 10 nursing/para-medical colleges, further to set up 8 GIDCs in the tribal belt to generate employment opportunities for tribal youth.About 25 Birsa Munda Gyan Shakti Residential Schools would also be set up to provide the best residential schooling facilities to 75,000 meritorious students from the tribal community.