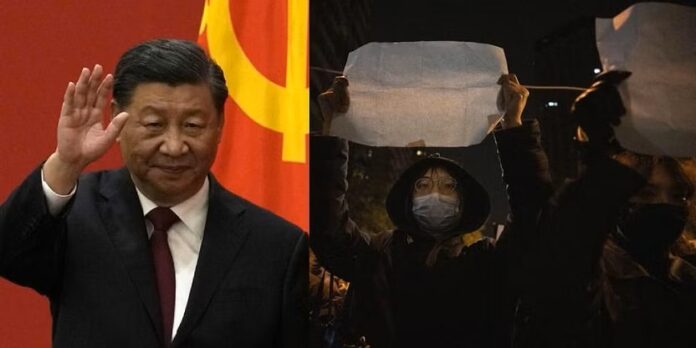 BEIJING: Protests spreading in China have been catalysed by fury at the government’s hardline zero-Covid policies but have also exposed deep-rooted frustration against the country’s wider political system.People took to the streets across China on Sunday to call for an end to lockdowns and for greater political freedoms, in a wave of widespread protest not seen since pro-democracy rallies in 1989.
A deadly fire last week in Urumqi, the capital of northwest China’s Xinjiang region, sparked public anger, with many blaming Covid-19 lockdowns for hampering rescue efforts. China remains the only major economy with a strict zero-Covid policy, with local authorities clamping down on even small outbreaks with strict lockdowns, mass testing campaigns, and lengthy quarantines.
While many had expected the policy to be relaxed after the ruling Communist Party’s five-yearly congress last month, Beijing instead doubled down. That fuelled the public rage now playing out on the streets of some of China’s biggest cities.”People have now reached a boiling point because there has been no clear path to end the zero-Covid policy,” Alfred Wu Muluan, a Chinese politics expert at the National University of Singapore (NUS), told AFP.
Yasheng Huang, a professor at MIT, said on Twitter the party’s new top leadership comprised of Xi Jinping loyalists was committed to zero-Covid. “Before the 20th Congress there was hope of policy change, but the leadership lineup of the Congress completely derailed this expectation, forcing people to take actions into their own hands,” Huang said.