Two people rescued from plane caught in power lines in US 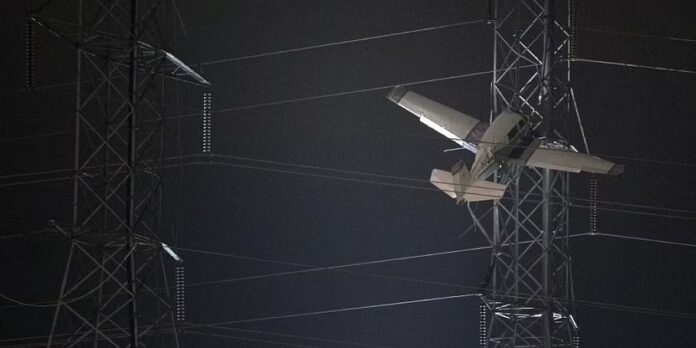 GAITHERSBURG: Two people were extricated from a small plane early Monday in Maryland, several hours after they crashed into power lines, causing widespread outages in the surrounding county.Montgomery County Fire Chief Scott Goldstein said the plane was secured to the tower at 12:16 a.m. and the first occupant was removed from the plane at 12:25 a.m. The second occupant was out at 12:36 a.m.
Goldstein did not say which of the men, identified by Maryland State Police as pilot Patrick Merkle, 65, of Washington, D.C., and passenger Jan Williams, 66, of Louisiana, were rescued first from the plane that was stuck about 100 feet (30 meters) above the ground.He said both men suffered “serious injuries” from the crash and that hypothermia was also an issue. Both men were transported to local trauma centres with non-life-threatening injuries, Goldstein said.
The Federal Aviation Administration said in a statement that the single-engine plane, which had departed White Plains, New York, crashed into a power line tower near Montgomery County Airpark in Gaithersburg around 5:40 p.m. Sunday.Pete Piringer, chief spokesperson for the Montgomery County Fire & Rescue Service, had said on Twitter that the people on board were uninjured and that rescuers had been in contact with them. He had at one point said in a video message that three people were on the plane but later clarified that it was two.
Goldstein said that utility contractors will first work to ground the high-tension wires to make it safe for rescuers to work. Fire crews will then use bucket trucks or a crane to make the plane stable by chaining it or strapping it to the tower. After the plane is more stable, Goldstein said, rescuers will use the crane or bucket trucks to bring the two people down. He said rescuers are periodically contacting them by cellphone to check on them.
The FAA identified the plane as a Mooney M20J.The video showed a small white plane positioned nose up near a power tower. A local television station’s live video showed the plane remained stuck in the transmission tower after 8 p.m.The utility Pepco had reported that about 120,000 customers were without power in Montgomery County. At the time of the rescue, most of the power had been restored to the county, outside of the crash site. Goldstein said the next steps were to secure the plane, remove it and then the powerlines will be restrung and reconnected.
Piringer said that Montgomery County schools announced that schools will be closed on Monday.The crash took place in Gaithersburg, a city of 69,000 people about 24 miles (39 kilometres) northwest of Washington, D.C.The cause of the crash wasn’t immediately clear. The FAA and National Transportation Safety Board will investigate what happened.