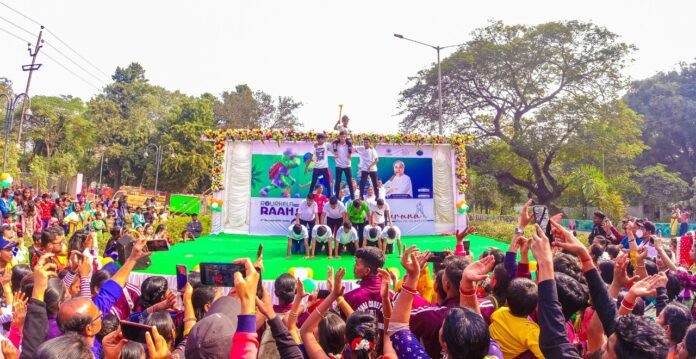 Rourkela : The Steel City swayed to the tunes of ‘Raahgiri’ as the stretch between Hanuman Vatika and Sarana Chowk was densely crowded on a cold Sunday morning.
Everyone, from young to old, women and men, participated and they displayed their talents, thoroughly enjoying their first ‘Raahgiri’ or ‘Pathotstav’ in Rourkela, jointly organised by the Rourkela Municipal Corporation and Rourkela Smart City Limited, in the run up to FIH Men’s Hockey World Cup 2023.As the grand sporting event is approaching closer, the festive spirit of the Steel City is intensifying. Today’s Raahgiri was held on the aforementioned stretch which was divided into nine zones where different programmes and competitions for different categories of people were organised. 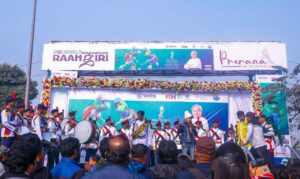 Cultural programs were held in 1st and 9th zones. Cultural programs were performed by teams and school children. Municipal Commissioner Dr Subhankar Mohapatra expressed happiness and thanked people of the city to make the programme a success. To enhance the spirit of the citizens for the upcoming hockey world cup, the RMC decided to organise Raahgiri, City Sports Carnival and a Mini Marathon.
Raahgiri on Sunday was a part of this series of events. Today, various women and social organizations of the city drew rangoli on the occasion of the ‘Hockey’ World Cup in the women’s zone. Be it the musical band of Rourkela police or colourful events for the kids, the atmosphere was enthralling with every event, small or big. The winners of contests and sports competitions were given away awards.
DIG Police, Niti Shekhar, Sundergargh Collector Dr Parag Harshad Gavli, Rourkela SP Mukesh Kumar Bhamoo, Director Incharge, Rourkela Steel Plant, Atanu Bhowmick and all employees of RMC and RSCL were present on the occasion. The city cycling team also raised awareness about cycling in Rahagiri and the need of cycling for fitness. Along with this, they informed about the need of yoga and exercises for fitness. The dog show CRPF personnel and bike stunts by the local biker group left the audience in awe.During the event, Biju Patnaik Award winner Tej Kumar Khes, senior Hockey Coach Milton Bilung and Hockey Coach Bijay Lakra were felicitated.
Share
Facebook
Twitter
Pinterest
WhatsApp
Previous article19 Innovative and Disruptive Startups Showcase Products and Services at Make in Odisha Conclave 2022
Next articleChief Minister Naveen Patnaik launches the Trophy Tour of the FIH Odisha Hockey Men’s World Cup 2023