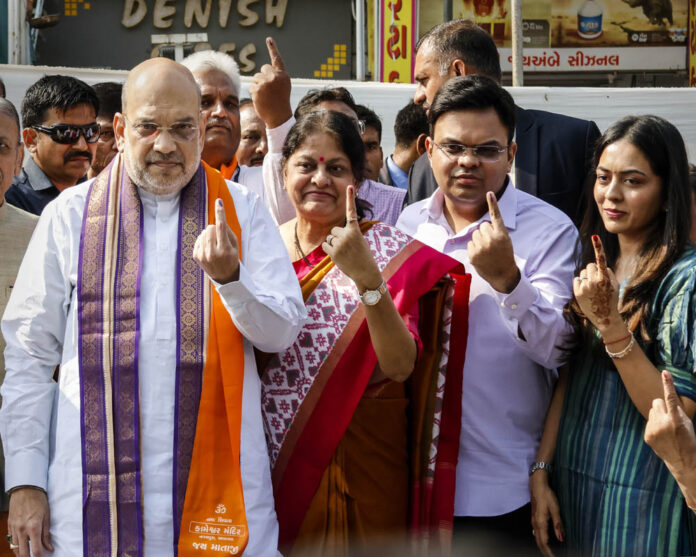 Union Home Home Minister Amit Shah on Monday cast his vote in Ahmedabad during polling for the second phase of Gujarat Assembly elections and appealed to people to strengthen the state’s “development model” by coming out to vote in large numbers.Shah, who represents Gandhinagar seat in the Lok Sabha, reached the Naranpura sub-zonal office polling booth here along with his family members including wife Sonalben Shah and son Jay Shah.
Talking to reporters after casting his vote, the Bharatiya Janata Party (BJP) leader appealed to people to carry forward and strengthen Gujarat’s ‘development model’ through their votes.”I urge all the voters, especially the first time voters, to exercise their franchise without fail to take ahead this two-and-a-half decades of journey of development, because Gujarat’s development is not limited to our state only. Gujarat’s development is a medium to bring development in the country,” Shah said.
The BJP has been in power in Gujarat for more than 25 years.Shah said Gujarat’s development serves as the foundation for the development of the entire country.The BJP leader said various achievements of the ‘Gujarat model’, such as high industrial investment, 100 per cent enrolment in schools, zero drop out and poverty alleviation schemes, have been attracting attention of the whole country.
“I urge the voters to come out in large numbers and vote for strengthening this development model,” said Shah.Voting was underway on Monday for the second phase of polls in 93 out of the total 182 Assembly seats in Gujarat.Earlier, polls in 89 Assembly seats were held on December 1.The counting of votes in all the seats will be taken up on December 8.

Share
Facebook
Twitter
Pinterest
WhatsApp
Previous articlePeople of Gujarat listen to everyone but it’s their nature to accept what is true: PM Modi after casting vote in state polls
Next articleHansika Motwani and Sohael Kathuriya ties knot in Jaipur’s Mundota Fort and Palace