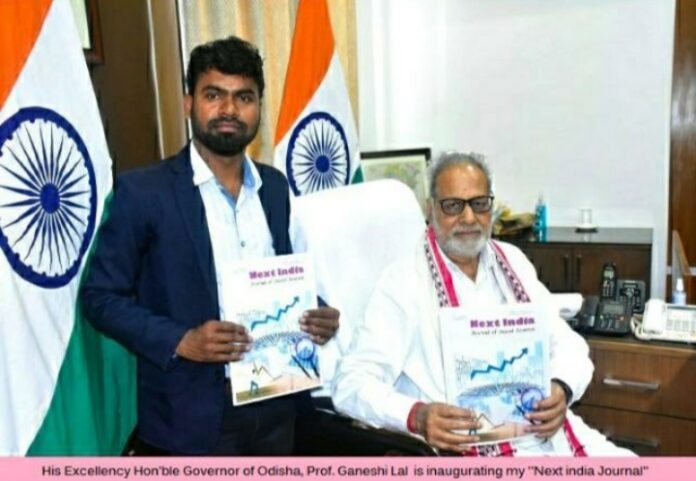 Trilochan born in Fakirpur village of Keonjhar District of Odisha. He born in a agriculture family, His father Purna Chandra Sahoo is a farmer and mother Smt. Pratima Sahoo is housewife and his only one younger brother Manoj Kumar Sahoo is studying Bachelor of Education (BEd.). Now he is very much familiar in writing article and making Documentary film in Odisha. His many article , research papers have been published in different news papers, Journals in Odia, English and other languages. His many documentary films and short films have been apprised and recognized by audience. He is working for promotion and conservation of Art & Culture, Nature, Literature as a whole.
He was the Topper in Bachelor of Arts in Economics from North Orissa University Odisha in the year 2010. He has also completed his MBA(Finance) from Utkal University , Odisha and then after he has completed Post Graduation in Economics. Further he is publishing a Research Journal which is registered in RNI, Govt of India. His Research Journal name is “Next India Journal Of Social Science” which is registered at RNI, Gov. of India. The said Journal has been inaugurated by His Excellency Hon’ble Governor of Odisha. Now Sri Sahoo is pursuing research in social sector development in India.
His Poem Anthology Book named as “Sesa Swapna” is under published by Kendra Sahitya Akademi, Govt. of India.
Sri Trilochan Sahoo has make more than 30 short and documentary films on different social issues. His films have been found in Kalinga Film Production YouTube Channel. His major films are Save Electricity, Helmet, Last Phone Call of Mother, Fakirpur Ama Sanskruti Ama Parampara, Gadachandi, Chakratirtha, , Lift, Swachha Bharata, Nilarakta, Mati Luha, paribarttana,Life in lock Down, Jari, Driver, Chitra Kagaja, Mun Bi Vote Debi, Barddi, Mo Triranga, Basin, Rakta Jhoti and Avagini etc,.
His short Film ” NILA RAKTA” was participated in Utkal Short Film Festival, Bhubnaeswar 2020 and also awarded. His “Documentary Short Film “Mati Luha” was participated in SHOWCASE 2020-NEWS7 Short Film Contest and also telecasted in NEWS7 television on 14th November 2020 at 10.45 AM and 3.15 PM two times. His short film “Helmet” has been participated in CLUBBY- Online Mini movie Festival 2019 at Goa. Further his documentary film “CHITRA KAGAJA” was also participated in RIYA SHOW CASE 2021 NEWS7 Short Film contest and also telecasted in NEWS7 television 04th May 2022 at 11.45 AM and 3.15 PM two times.
His first poem published in “KAYAKALPA” magazine published from Cuttack Odisha in the year 2006. The poem name was ” PREMA”. At that time this has been widely praised and appreciated a lot. He is writing from this year and his many articles, stories, poem have been published in different news paper , Journals, magazines in Odisha. His also written many articles for the SASWATA magazine which was published from Anandapur College when he was a student of this college. The Editor of THE PRAGATIVADI news paper was also written a letter to Sri Sahoo in 2006 to write more and more for the literary filed.
He was the Former Assistant Secretary of Athletic Society, Annadapur College and also was the Vice President of Anandapur College Union(2008-09), Aaandapur, Keonjhar,Odisha, He is also now publishing the ” Next India Journal of Social Science’ and also acting as Editor of this Journal.
He has participated many regional and National seminar and conferences. He has attended Ten days residential Inter College NSS Special Camp from 22nd January to 31st January 2008 organized at Chitrada Collee, Chitrada Mayurbhanj . Further he was participated 43rd Annual All India Youth Training Camp from 25th December to 30th December 2009 at Basantapur, Paschim Medinpur, Kolkatta organised by Akhil Bharat Yuva Mahamandal, gives Seminar Talk on “Population and Development of Indian Economy” on 14th, Nov, 2018, Organized by L. N. Degree College, Pipilia, Keonjhar, Odisha, participated National Seminar on District Mineral Foundation ( Pradhan Mantri Khanij Kshetra Kalyan Yojana (PMKKKY) on 24th June 2018 at Mayfair Convention Hall, Bhubaeswar organised by “The Mother Erath BHUMI”, participated 51st Annual Conference of Orissa Economic Association from. 09th -10th February , 2019 at Kendrapara Autonomous College, Kendrapara Conducted by Orissa Economics Association, participated Five Days Training Programme on “Result Based Planning Methodology in School Education : Implementations for Developing school Education Plan under Samagra Siksha in Odisha” Conducted by National Institute of Educational Planning and Administration (NIEPA), New Delhi from July 29 to August 02, 2019 at Hotel Empires, Bhubaneswar , participated in Five Days Training Programme on “Analytical Framework and Techniques of School Education Sector Diagnosis”. Conducted by National Institute of Educational Planning and Administration (NIEPA), New Delhi, July 15-19, 2019 at NIEPA, New Delhi , participated Three Days Training on “School Safety and Disaster Management” from 17th to 19th October, 2019 at Gopabandhu Akademy of Administration, Govt. of Odisha, Bhubaneswar conducted by Gopabandhu Akademy of Administration, He also attended online Five Days International Workshop on “Progress in Adoption of Sustainable Agriculture in India : Barriers and Opportunities”. April 25-29 , 2022 Conducted by National Institute of Technology (NIT), Karnataka .

Recently he has represented Odisha in “Eastern Regional Young Writers Meet” at Southfield College, Darjeeling organized by “Sahitya Akademi”, Ministry of Culture, Govt. of India.
Sri Sahoo awarded and felicitied from many reputed organization and Government. Pragyanshree Sanskrutika Parishad , Anandapur awarded Sri Sahoo towards secure of Topper Position in Economics in North Orissa University for the Year 2010.
He has also received “Prakruti Bandu” Award for the Year 2021 from Department of Forest and Environment, Govt. of Odisha.
He has received SAHESWARA SANMANA from Pen In Books Publication Bhubaneswar for Poem Writing in the year 2018 in the eve of Young Author Award Ceremony organized at Jaydev Bhawan Bhubaneswar Odisha,
Received YOUTH UTKAL Award from Event Publication from Bhubaneswar for story writing in the year 2019 at Bhubaneswar, Received UDAYARAAG Sanmana from Time Pass Publication Bhubaneswar Odisha fro Story Writing in the Year 2019 at the programme organized Odishi Research Centre , Bhubaneswar.
He is the Winner of UTKAL SHORT FILM FESTIVAL organized at Bhubaneswar in the year 2020, ENCOURAGEMENT LETTER has been given to Sri Sahoo by the Mr. Panchannana Mallick, OAS-A(JB), Block Development Officer, Anandaur, Govt of Odisha for contribution towards Nature, culture and Literature, APPRECIATION LETTER has been given to him by Hon’ble MLA, of Anandapur Assembly Constituency for promoting our culture , nature in form of making documentary film and for activities undertaken by Sri Sahoo for the public, APPRECIATION LETTER has been given to Sri Trilochan Sahoo by Chairperson , Anandapur Municipality, Keonjhar, Odisha towards different activities contributed to the society in the form of art and culture and making documentary film and he has also He has received letter from Principal Anandapur Anandapur College, Anandapur towards his achievement in college career.
Recently Sri Trilochan Sahoo has been placed in Odia Wikipedia. In this regard he convey his gratitude and hanks to all his well wisher and to whole Wikipedia team. His Wikipedia link is https://or.wikipedia.org/s/1oz9. All can access him to this link.
Sri Trilochan Sahoo is a Life Member of ORISSA ECONOMICS ASSOCIATION having Membership ID : S0095, he is a Life Member of UTKAL SAHITYA SAMAJ CUTTAK, Membership No 3131/22, Member of ANANDAPUR LEKHAKA SAMABAY SAMITI from 2012 , Member of FAKIRPUR SAHITYA SANSAD, Fakirpur, Keonjhar since 18.4.2000. and also he is a member of India Statistical Association having Membership No is : ISA/AM/2022/1245.
Sri Sahoo is now working for promotion and conservation of Art & Culture, Nature, Literature in Odisha and create a milestone in this regard and now he is known as Nature and Culture man of Odisha.