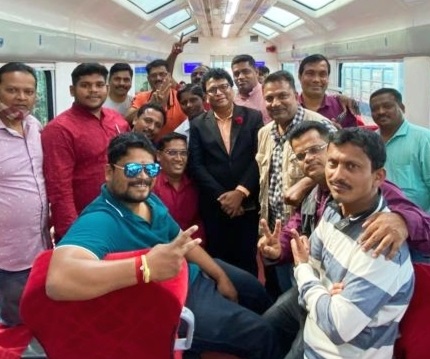 Buruea Head ( PKB): Tremendous amount of improvement is going to take place towards the affirmative progress in the infrastructure of Jeypore railway station. This was stated by Divisional Railway Manager, Waltair Division Mr.Anup Kumar Satpathy during his visit. So much enthusiasm and love was reported to have been felt by the media fraternity the moment Sri.Satpathy stated categorically that “You would be tired of expressing your gratitude and appreciation to the Railway division looking at the abundance of improvement not only in infrastructure but also in the beautification of the surrounding areas of the Jeypore railway station” The DRM went around the Jeypore railway station and assured of improvement. His open-hearted expression with so much decency in behaviour brought cheers among the people. As soon the media personnel demanded for the arrival of Hirakhand , Samleshwari in platform number one of Jeypore station, he then and there asked the station master Mr Kujhur to implement it provided there causes no clash of trains.
Sri Satpathy, being an odia , has got a great deal of passionate love to bring aesthetic improvment of not only Jeypore station but Koraput, Rayagada and also Malkangiri.
While sharing his views to media fraternity inside the Vistadom Couch for more than one hour, he signalled the radical transformation in the sanitation, water facility, lights and electricity. His open-hearted and candid expression of confidence to improve the quality of the station significantly boosted the morale of many others including print and electronics brothers and sisters. The double lining of the rails and the acceleration of infrastructures like safety, security, cleanliness and hygiene, lifts, parking provision, sanitation facilities and many other services are the most important priorities for which tender floating has already been over.
It was very nice to have interaction with Sri Anup Kumar Satpathy as being stated by all the media personnel who accompanied him upto Koraput. Commercial DM Mr. Tripathi, Senior DMA Mr Patra, Technical Expert Mr Maharana and a battery of railway staff members were present inside the Vistadom Couch. As soon as Mr.Anup Kumar Satpathy arrived at Jeypore railway station, everyone including the station master Mr. John Kujur, Mr.Khieo and media fraternity thanked him for his significant role towards the provision of Vistadom Couch to koraput district. Many demands like extention of Rourkela Jagdalpur Train through Araku and a Daybound train to Bhubaneswar were kept before him for approval following which he assured of drawing the attention of the railway board, Mr.Satpathy stated. As soon as the train arrived at Koraput Railway Station, some thousand of people including railway staff were present to welcome the most dynamic officer of Waltair Division Sri.Anup Kumar Satpathy