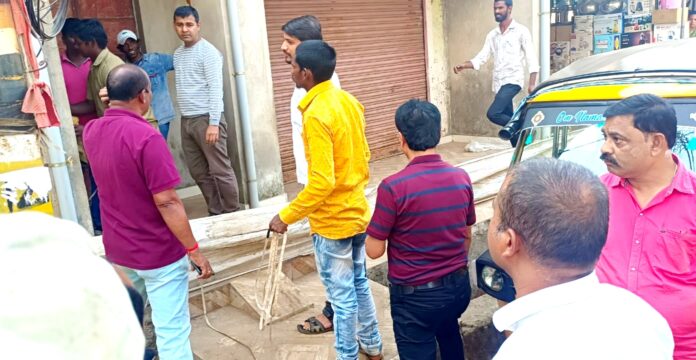 Buruea Head (PKB): Jeypore municipality in Koraput District in Odisha has undertaken a drive to earmark the illegally constructed areas of the MG road. There are huge traffic problems in this route which was constantly complained by many people. On Wednesday, the executive officer , Siddharth Pattnaik along with the Municipality sanitation workers including the Junior Engineer Ajay Kumar Jani made the measurement of the encroched areas of both the sides of MG road. Most of the bussiness men throughout this road have made illegal stretching of their stalls as a result of which people lodged complaints time and over again to the executive officer, Mr.Patnaik.
The general people, finding the intervention of the local urban body, became not only happy but also supported the steps being undertaken by the Municipality. Day by day, there are uncontrolled growth of illegally constructed areas which pose a challenge to the local administration. On Tuesday, there was measurement being taken in the NKT road areas.
The executive Engineer of PWD Bhaskar Chandra Samantray was also asked for the construction of drains throughout the MG and NKT road areas at the earliest. The steps being undertaken by the concerned authorities of PWD would facilitate the Municipality for eviction as stated by the executive officer Siddharth Pattnaik. 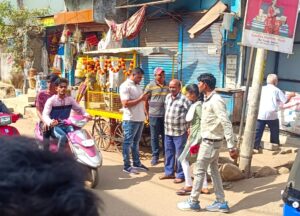 After the information about the measurement into the illegally occupied areas spread, people in general and senior citizens in particular including intellectual groups supported the steps being undertaken by Mr Patnaik. While expressing his confidence in this mission, Mr.Patnaik stated” We shall convince people who have illegally constructed to demolish by themselves otherwise, there would be action against the ill-intention of the illegally constructed people” The Govt of Odisha across the state have taken the illegally constructed areas very seriously and also taking steps to demolish those places. It is also to be noted here that the years-old illegally constructed areas of Lord Jagannath Temple, Puri were also demolished after serving notice. This is demand of the general commuters as a serious complaint before the Municipality following which actions are reported to have been taken by the local administration.
Share
Facebook
Twitter
Pinterest
WhatsApp
Previous articleDharmendra Pradhan skips Jeypore
Next articleMP, Koraput Saptagiri Ullaka raised KV issue at Parliament during Zero hours