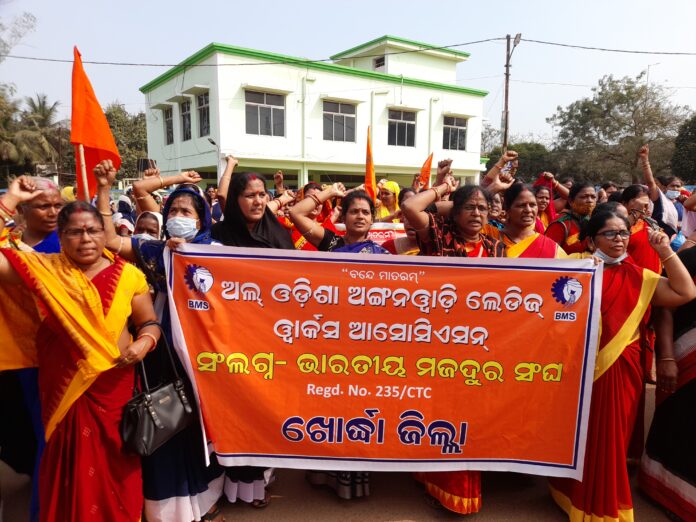 Khordha: Called by All Odisha Anganwardi Ladies Workers Association an Affiliated Body of the Bharatiya Mazdoor Sangha. Anganwardi Workers of Khordha District Stage a Protests Infront of the Collectorate Khordha to Press for Execution of their Demands. The Anganwardi Workers are Demanding that Must get the Tag of Government Employees and Monthly Remuneration of Rs-18000 for Anganwardi Workers and Rs-9000 for their Assistance. Anganwardi Workers are on Indefinite Dharana Demanding the Status of Government Employees and a Hike in their Remuneration. More than 3000 Anganwardi Workers from Different Parts of Khordha District Stage Demonstration infont of Collectorate Khordha. Besides their Demand of Rs-5000 pension must be Fulfilled. If their Demands are not Meet their Strike Won’t End, Said Sumitra Mohapatra, President of All Odisha Anganwardi Lady Workers Association. In a Protests Meeting All Odisha Anganwardi Workers Association State President Mrs. Sumitra Mohapatra, Vice-President, Sushree Banitanjali Das, Cashier, Mrs. Kunjalata Das, Bharatiya Mazdoor Sangha State Cashier, Laxman Das, State Executive Body Members Bijaya Patra and other Members of the Association delivered their Speech and Submitted a Memorandum to the Collector Khordha address to Chief Minister Odisha. District Secretary Mrs. Saraswati Baliarsingh, Cashier Mrs. Mandakini Pradhan Co-ordinated the Programme. Executive President Pravati Mangaraj, Dali Routray, Suryamani Mishra, Namita Pradhan, Rini Dei were Present in the Protests. They Threatened to Continue the Cease Work Agitation Until their Legitimate Demand have not been Met by the Government. 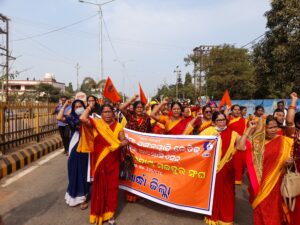