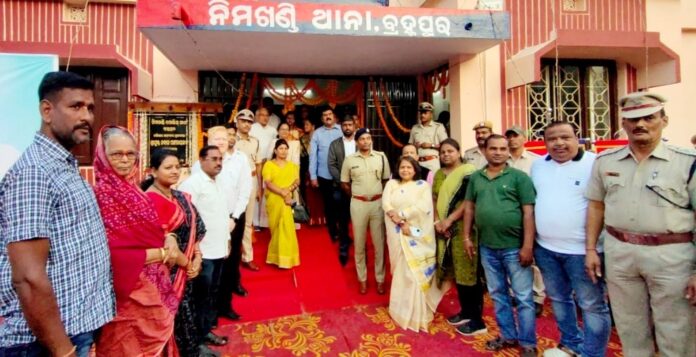 Ganjam : Chief minister Naveen Patnaik on Monday inaugurated Nimakhandi police station along with 29 other police station across the state via video conference which was upgraded from OP to PS. The suburban 9GPs have been tagged to the newly formed police station simultaneously other newly formed police station under Ganjam police district have been inaugurated those are Beguniapada P.S. under Kodala and Kotinada P.S. under Aska Block respectively. In the said inauguration function Hon’ble MP Chandra Sekhar Sahu, MLA Bikram Kumar Panda, Southern division IG Satyavrata Bhoi, Ganjam Collector and DM Divya Jyoti Parida, Berhampur SP Saravana Vivek M, CDO, ZP, Ganjam V. Keerthi Vasan, BeMC Commissioner J. Sonal and all other police officers were present in the function. It is said that the newly formed Nimakhandi P.S. building is under construction, for time being the Old Mahila P.S. building will be working as Nimakhandi PS.