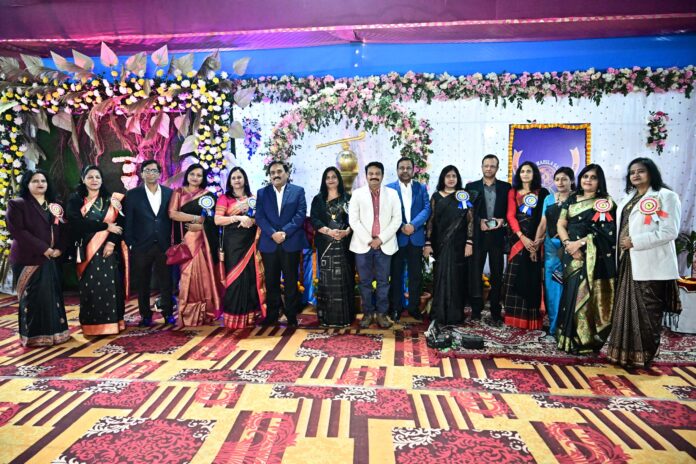 Rourkela : The Annual Grand Fete of Deepika Mahila Sanghati(DMS) was held at Rourkela Club on 7th January. Mr. Atanu Bhowmick, DIC, Rourkela Steel Plant (RSP) inaugurated the fete by lighting of the ceremonial lamp, in the presence of Mrs. Seema Bhowmick, President Deepika Mahila Sanghatii. Also present on the occasion, Mr. S R Suryawanshi, ED (Works), Mr. P K Satapathy, ED (P&A), Mr. Somnath Tripathy, ED (MM), Dr. B K Hota, ED (M&HS) of RSP, Mrs. Harshala Suryawanshi, Mrs. Hiranmayee Satapathy, Mrs. Samapika Sahoo, Prof. Susmita Das and Mrs. Jayashree Hota, all Vice Presidents of DMS, Mrs. Nidhi Singhal, Secretary of the Sanghati, many senior officers of Rourkela Steel Plant and members of the Governing Body and other members of the organisation were also present on the occasion. This year the theme for the fete was ‘Hockey’ keeping in view the upcoming Hockey World Cup in the Steel City. Mr. Bhowmick along with other guests and dignitaries visited each of the stalls and evinced a keen interest in them.
Stalls offering mouth watering delicacies, fun filled engaging Games, art & crafts, household items attracted large crowds. Musical Extravaganza by talented artists kept the visitors entertained throughout the evening. The mega event had fun elements for all ages with a chance to win exciting prizes. The Fete evoked an enthusiastic response from the Rourkelites who enjoyed the evening to their heart’s content.
It is worth mentioning here that, Deepika Mahila Sanghati, is working towards the cause of the underprivileged and down trodden people living in and around Rourkela since 1957. Besides, the organization is also associated with various CSR initiatives of Rourkela Steel Plant. Deepika Ispat Sikshya Sadan, the free school of RSP for the poor children is being managed by the Sanghati. The school having classes up to the 10th with more than 650 students is registering 100% pass percentage in BSE, Odisha board since the 1st batch appeared in 2016.
Several other CSR initiatives taken by RSP like the Deepika Ispat Hast Kargha, low cost Sanitary napkin production unit, phenyl making unit are also being run by the Sanghati successfully for last many years, thereby empowering many underprivileged women. The proceeds of the Fete will also be utilized for the different philanthropic works of the organization.

Share
Facebook
Twitter
Pinterest
WhatsApp
Previous article“G-20 is not just a diplomatic event, but it should be turned into a historic event of public participation where one can witness the spirit of ‘Atithi Devo Bhava’”: PM Modi at Pravasi Bharatiya Diwas in Indore
Next articleLeaders will come for 2024 election to Jeypore