Reconstruction of Puri temple without my opinion : Shankaracharya 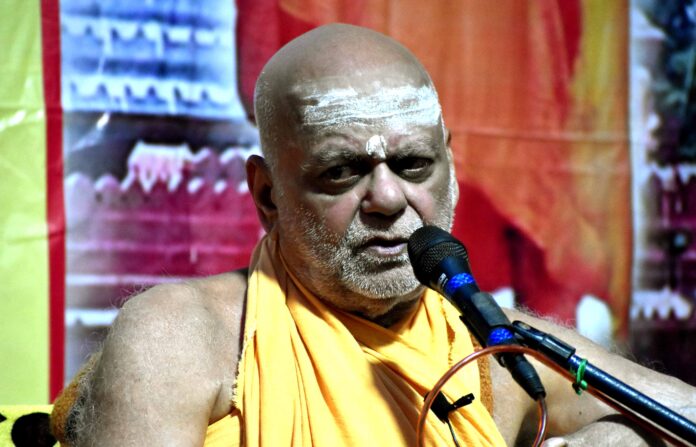 Staff Reporter, Ganga Sagar, NF TIMES : Shankaracharya Maharaj of Puri spoke about the reconstruction of the Puri temple while sitting on the Ganga Sagar. On Friday, he faced the journalists at Ganga Sagar in West Bengal? There he expressed his anger against the local administration regarding the restoration of the Puri temple.He said, “Everything is done in Puri without my opinion. But there is an order of the Supreme Court, if you want to renovate the Puri temple, talk to me once and take my opinion.”
This is not the end, making it clear that he is quite unhappy with the whole incident, Swami Ji Maharaj Shankaracharya also said today, “Such works are done only when I am out of Odisha, as now I will be out of the state for about one and a half months to work on the reconstruction of the temple. It will be done without my opinion.”?
He further said, “In 1999, when I had just taken charge of Shankaracharya, the World Bank talked to me and took major financial decisions. Even the leaders of major political parties of the country consulted me before taking decisions, not only the administration of Puri felt the need?”However, from this press conference, he said that he will protest in the name of development or “development” in the name of Puri and anywhere else. So what to stop the development? In response to this question, Shankaracharya Maharaj said, “Development should be done in harmony between development-science-politics?” Already, the Center and various state governments are emphasizing on tourism in several pilgrimage sites, but as a result, the status of the pilgrimage sites is getting damaged a lot, he said.
His statement in this context, “It is better not to become a place of penance. But let it improve, but by maintaining the tradition of penance.”yena disahina na ha?a.”
He brought up the issue of human body with this development. He said, “If we impose our own creation on the human face as God has sent it, then it will not be a fair creation. It is better to remain as the eyes are in the body, so the infrastructure should be changed in the name of development but it should not be directionless.”
In response to a question about former Congress president Rahul Gandhi’s ‘Bharat Jaro Yatra’, Shankaracharya Maharaj of Puri said that behind the programs of every political party there is some political goal. But since I am not involved in any political party. So I can say one thing, if power capture is not the only goal in the future, then I support this journey.